Vatican: Pell has right to appeal to High Court 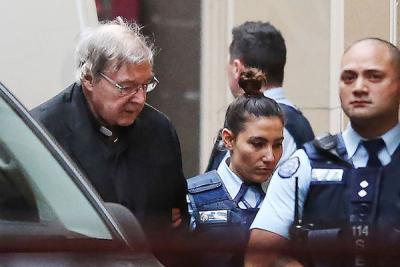 VATICAN CITY - In a brief statement on Wednesday the Holy See has "acknowledged" an Australian court's decision to reject Cardinal George Pell's appeal against a six-year prison sentence for sexually abusing children but recalls the prelate "has always maintained his innocence."

“The Holy See acknowledges the court’s decision to dismiss Cardinal Pell’s appeal,” said the statement issued by Director of the Holy See Press Office on Wednesday morning. “As the proceedings continue to develop, the Holy See recalls that the Cardinal has always maintained his innocence throughout the judicial process and that it is his right to appeal to the High Court,” the statement read. "The Holy See confirms its closeness to the victims of sexual abuse and its commitment to pursue, through the competent ecclesiastical authorities, those members of the clergy who commit such abuse."

The Supreme Court of Victoria rejected Cardinal Pell’s bid to overturn five convictions for sexually abusing two choirboys in Melbourne in the 1990s.

“By a majority of two to one, the court of appeal has dismissed Cardinal Pell’s appeal against his conviction,” Chief Justice Anne Ferguson said.

Sentenced to six years in prison, with a non-parole period of three years and eight months, Pell has spent 175 days in solitary confinement.

He is expected to appeal to the High Court of Australia.