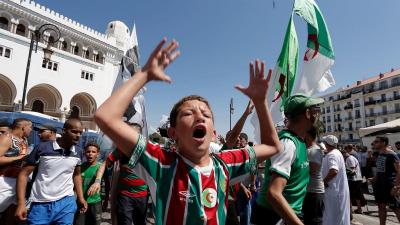 NEW YORK – For exactly six months, thousands of protesters have been gathering in the streets of Algiers and other major cities, every Friday without fail. Last Friday marked the 26th time they had gathered in this way. Undeterred by security vehicles and barriers blocking their advance on Central Post Square, they chanted slogans and vowed that the Hirak, or protest movement, would not stop until all their demands were met, including the removal of every remnant of the old regime in Algeria.

It has been more than four months since the demonstrations, which first began in February, compelled former president Abdelaziz Bouteflika to step down. He was replaced by interim president Abdelkader Bensalah, a longstanding supporter of Mr Bouteflika, who nevertheless promised to steer a transition towards greater sovereignty for Algerians. Yet last month, presidential elections were postponed for the third time this year and that political tract has yet to materialise. After months of continuous protests, demonstrators’ demands have put them on a collision course with the army.

For the Hirak, the removal of Mr Bouteflika from power was not enough. Instead, it is calling for the overhaul of the entire political system that has ruled Algeria since its independence from France in 1962. It is also demanding the establishment of legitimate state institutions and a sweeping out of the old guard, known as “le pouvoir” (the power), a shadowy group of kingmakers made up of army officials and intelligence.

There have been a number of high-profile arrests and resignations in the months since Mr Bouteflika stepped down in April. Tayeb Belaiz, the chairman of the Constitutional Council, resigned a few days later but for the Hirak, he is just one of the "three Bs" who need to go. They are insisting, too, on the removal of loyalists Mr Bensalah and the prime minister Noureddine Bedoui to signify a complete overhaul of those in power.

Even the massive crackdown on corruption and cronyism targeting allies of Mr Bouteflika has done little to assuage the demonstrators’ anger. Said Bouteflika, the former president’s younger brother, who was considered the real power behind the throne after his brother suffered a stroke in 2012, was arrested in May, together with intelligence chiefs Bachir Athmane Tartag and Mohamed Mediene. They were followed in June by the arrests of former prime ministers Ahmed Ouyahia and Abdelmalek Sellal on corruption allegations, and former trade minister Amara Benyounes for misuse of public funds. They are being held in the notorious El Harrach prison without any special privileges, with a leaked video suggesting they were regularly subjected to verbal abuse from fellow prisoners.

A surprise arrest was that of Louisa Hanoune, general secretary of the Workers’ Party, in connection with the investigation into Mediene, the former head of the brutal but now dissolved national intelligence agency and Tartag, head of the Directorate of Security Services. While she is co-accused of “conspiracy against the authority of the state”, rights groups claim she has been targeted because of her political affiliation.

What is clear is that the army, led by Lieutenant General Ahmed Gaid Salah, is now the main player in Algerian politics. Many observers think the recent arrests had a dual objective. Not only did they get rid of high-profile political and economic figures associated with the ousted president but they also helped undermine Lt Gen Gaid Salah’s enemies.

The pursuit of retired general and former defence minister Khaled Nezzar is a case in point. In an interview with the daily newspaper Algerie Patriotique, Nezzar said that as demonstrations intensified against Mr Bouteflika in April, his brother Said had sought his opinion on how to fire Lt Gen Gaid Salah, declare a state of emergency and subjugate the Hirak.

Nezzar is certainly not without a smear on his character. He is reportedly on the run in Spain while an international arrest warrant for war crimes allegedly committed during Algeria’s dark decade in the 1990s hangs over him. But activists point to these high-profile court cases in Algeria as a sign of internal strife and a ruthless power struggle between the old guard and the new de facto strongman of the country, rather than a real effort to modernise and democratise state structures.

Since Mr Bouteflika was forced out, the army chief has pushed the limits of his constitutional authority, causing suspicion and confusion. Last month, for example, he extended Mr Bensalah’s mandate beyond the 90-day constitutional period for an interim president. Most recently, he has outraged protesters by banning the Amazigh flag from rallies, while police have been accused of being heavy-handed with demonstrators form the minority.

In light of such actions, democracy advocates are troubled by the prospect that the current leaders seem to be reverting to business as usual.

However, a group of opposition leaders and civil society figures last month came together to open a forum for a national dialogue, calling for free and pluralistic elections to be held within six months. The protest movement wants to see significant steps as a prerequisite to any political process, including the release of demonstrators who have been arbitrarily arrested.

They are also now calling for civil disobedience, a dramatic development compared to previous demonstrations, when demands were limited to the removal of members of the old regime.

There is political stalemate as Lt Gen Gaid Salah has categorically rejected the Hirak’s pre-conditions to talks. It seems the main obstacle to Algerians having their needs met is the very same military that helped oust their former president.

Dr Abdelkader Cheref is an Algerian independent scholar based in the US.

This article first appeared in The National.