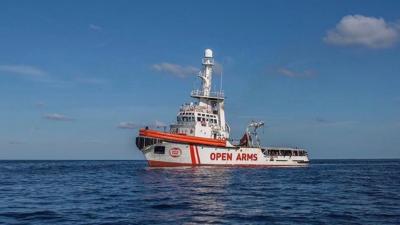 ROME - The Open Arms rescue ship, stranded in the Mediterranean for 18 days, has been offered a safe port in Spain, a decision the NGO has slammed as “incomprehensible.”

“After 18 days of stalemate, Italy and Spain seem to have finally found an agreement, a decision that seems completely incomprehensible to us,” Open Arms president Riccardo Gatti said.

“With our boat 800 metres from the coast of Lampedusa, European states are asking a small NGO like ours to deal with 590 miles and three days of navigation in adverse weather conditions,” he added.

Hopes of landing on the island of Lampedusa were dashed for the NGO following a health inspection that deemed the hygienic-sanitary conditions as "fairly acceptable" and "less dramatic" than first thought.

“There is no health emergency on board,” Italy’s Interior Minister Matteo Salvini said.

But 17 days of living virtually piled on top of one another was too much for some migrants, who, exhausted and psychologically devastated, threw themselves into the sea in an attempt to reach Lampedusa's shore, just 150 metres away.

They were retrieved by NGO volunteers.

“Madrid has opened its ports, if you stick it out you win,” the anti-migrant League leader said. “Refusing Spain is unacceptable.”

The Italian Coast Guard will escort the ship to Spain “with all the necessary technical support, to land all the migrants on board there,” Transport Minister Danilo Toninelli said.

Mr Toninelli has urged Europe to find a solution to the ongoing migrant crisis once and for all.

“Enough with this tug of war between EU countries that regularly pretend not to see and hear, and leave Italy alone to manage the migration phenomenon which, instead, concerns all of Europe,” he said. “It is all the more necessary and urgent to change the Dublin Regulation.”

In the meantime, 24 minors who disembarked at Lampedusa are being taken to Porto Empedocle, Sicily, and will be placed in various reception centres.

The migrants on board Open Arms will be distributed between six EU countries – France (which has offered to take 40), Spain, Germany, Portugal, Luxembourg and Romania.