Regenis call Italy to action against Egypt's silence on murder 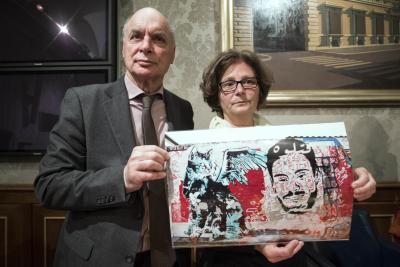 ROME - The parents of Italian PhD student Giulio Regeni, who was kidnapped, tortured and murdered in Egypt in 2016, launched Monday an online petition demanding that Italian Ambassador to Cairo Gianpaolo Cantini immediately return to Italy.

Cantini had left Egypt following Regeni’s brutal death, but has been back to his post in Cairo for two years.

According to Paola and Claudio Regine, Italy must act against Egypt’s lack of cooperation with the investigations. "The situation has never been so negative. The last rogatory has not been answered. There is no contact with the Prosecutor's Office. We need a strong signal," they told La Repubblica.

Since the Public Prosecutor’s Office in Rome added five agents of the Egyptian National Security to the list of suspects in late 2018, the judicial cooperation between both countries has been interrupted. The commercial cooperation, on the other hand, remained unshaken and continued to increase as Italy seems to have turned a blind eye to Egypt’s silence.

The online petition is a call to action to the Italian government. Having Cantini return to Italy is expected to pressure Egypt to re-establish contact with the Prosecution’s Office and move forward with the investigations.

Few hours after the petition was launched, it had already collected thousands of subscriptions.