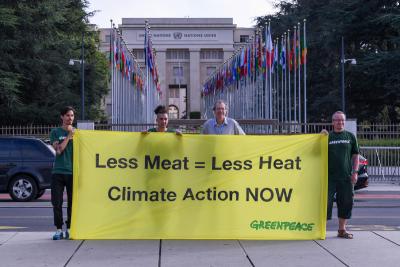 GENEVA – Protecting and restoring forests and urgently revamping the global food system through dietary change are the key solutions to the escalating land and climate crisis, an authoritative UN report has found.

The Intergovernmental Panel on Climate Change (IPCC) report reveals that since the pre-industrial period the temperature over land has already increased 1.53°C compared with the global average of a 0.87°C increase, taking into account air above ocean and land. The temperature rise is impacting food security and driving desertification and land degradation.

“Defending and restoring our forests and changing our food system by eating less meat will help turn the climate and biodiversity crisis into new hope for nature and people. Our land and biodiversity is under enormous pressure, as seen by the devastating fires in Siberia. We need to make some hard choices because we cannot use up our land twice and we’re already over-using it,” said Dr Christoph Thies, Forests and Climate Campaigner at Greenpeace Germany.

“To protect our climate and feed the world demands action now. Governments are now compelled to update and enhance their climate action targets in light of the IPCC’s report.”

The IPCC’s special report on Climate Change and Land warned that more than a quarter of land is subject to “human-induced degradation”but multiple solutions can boost both mitigation and adaptation, while also supporting sustainable development goals.

The IPCC added that bioenergy, alone or with carbon capture and storage (BECCS), poses high risks to food security and land degradation. ‘No regret’ options to combat the climate crisis involve forest and natural ecosystem protection and restoration and reduced meat production and consumption.

“The challenge is great, but the solutions are many. Changing the way we produce food and what we eat will protect our climate and promote food security. We can free up vital land space being used for animal feed and grazing through healthier plant-rich diets and ecological farming practices that will help sequester carbon in the soil and increase biodiversity,” stated Dr Reyes Tirado, Senior Scientist at the Greenpeace Research Laboratory, University of Exeter.

"A drastic drive towards less meat and dairy in our diets is the silver bullet for reducing the impacts of the food system on our health and the health of the planet.”

In other findings, the IPCC report found that 23% of human greenhouse gas emissions stem from deforestation, fires and agriculture but land can act as a powerful carbon sink to help mitigate the worst of climate change.

Better land-use alone will not stop climate change. Delaying the phase out of fossil fuels and shifting mitigation to the land sector will increase the risk of climate impacts and food insecurity.
Emissions from the food system as a whole, including production and consumption, represent up to 37% of total global human-induced GHG emissions.

The consumption of meat has more than doubled in the past 60 years as land was converted to agricultural use at an unprecedented rate in human history.

About 2 billion adults are overweight or obese, but 821 million people are still undernourished, highlighting the need to reform the global food system.