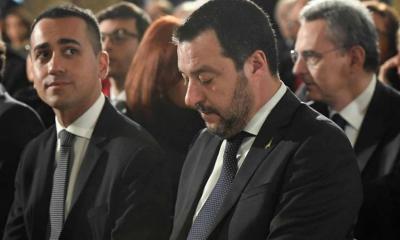 The League presented in the Senate, the upper house of Parliament, a motion of no confidence in the Government saying that there were 'too many nos' from the FIve Star Movement, the largest coalition member which has been at odds with the League on key policy issues such as the high-speed rail link between Turin and Lyon that the Five Star sees as upsetting the delicate Alpine ecological balance. It was not immediateòy clear when the conifdence vote will be held.

Salvini breached a hallowed tradition of never starting a government crisis on the eve of the sacred Aug. 14 Ferragosto holiday when MPs normally begin a leisurely vacation of several weeks at the beach and mountains with their mistresses and lovers. Conte conferred with President Mattarella Thursday at the Quirinal Palace on the burgeoning crisis and snapped at Salvini, saying the raucous League leader “will have to explain the reasons for the crisis.”

Salvini raised the political stakes Thursday after days of sniping against Five Star by saying “let’s go immediately to Parliament to take note that there is no longer a (government) majority, as is evident from the TAV vote, and let’s quickly give back the word to the electors.”

M5S leader Luigi di Maio for his part hit back saying he welcomed the prospect of an election that he argued would come back to bite the League. “The League has tricked the country,” he said in apparent reference to the League’s decision not to support Five Star opposition to the TAV high speed rail link between Turin and Lyon.