Review: 'A Devil Comes to Town' by Paolo Maurensig 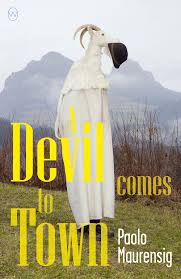 ROME - Italian literature has often been enriched by writers of the north-eastern frontier region where Italian, Germanic and Slavic cultures mingle. The best - known is Italo Svevo (the pen name of Ettore Schmitz) who combined Germanic and Italian influences. An interesting contemporary example is Paolo Maurensig of a Slovenian family which suffered Fascist attempts to eradicate their ethnic identity. Maurensig, instead, combines the two cultural identities – he writes in Italian but sets much of his fiction in central European locations.

When I interviewed Maurensig he explained that he usually follows an obsession for four or so years until he finds it, and his, limit, whether in making ancient musical instruments or improving his chess and golf.  These obsessions are often reflected in his writing which has been a life- long passion. He considers novels baggy, aiming rather at novellas in which the shape, construction or form is all important rather than flashy prose.

He was 54 before he had his first world- wide success in the 1990s with ‘The Luneberg Variation’ about a chess duel between a persecuted Jew and a Nazi. It was followed by another success but his subsequent books did not arouse much interest.

However two recent books show a return to form – ‘A Theory of Shadows’ was an intriguing novella on the death of Russian chess champion in a Portuguese hotel in 1926, which Maurensig suggests was ordered by Stalin. Now World Editions, a relatively new publisher which brings European writers into English, has brought out his latest.

“A Devil Comes to Town” occurs in an isolated German-speaking Swiss village where a publisher arrives offering a rich prize for the inhabitant who writes the best novel.

The tranquil village is transformed into a serpents nest. Almost every inhabitant writes a worthless account of their lives, full of malicious gossip. The old parish priest completes a tedious biography and is prepared to compromise his principles to win the prize. Rivalry is intense: violent quarrels erupt.

The only work of any merit is by a retarded young woman.

Maurensig highlights the traps entailed in desire for literary fame and the resultant money. The villagers conclude that ‘literature is the devil’s work or, better, his preferred weapon.’

It is a short step to seeing the mysterious publisher as the devil - who deserves death. Only a spoilsport would disclose the ending of this moral fable which makes fun of scribblers of banalities but also examines evil which is frightening because contagious – like the rabies spread by invading foxes whose cries are heard at crucial moments in the narrative.

It wouldn’t be a Maurensig if the entertaining fable did not have dark seams.