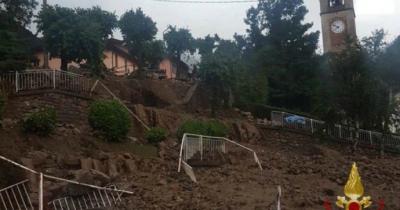 CASARGO, Lecco – 140 people have been displaced in the Lecco area after mud and landslides swept away cars following a wave of bad weather that hit northern Italy on Tuesday night.

Hardest hit was Casargo, where floods caused a landslide, sending mud and debris into the town’s centre.

Buildings pounded by the debris reportedly don’t have stability problems and people who have had to leave their homes will be given the opportunity to enter the ‘red zone.’

Meanwhile, the mayor of Valsassina, Leonardo Pasquini has called for a state of emergency.

“The damage is huge, but fortunately there are no victims,” the mayor said.

Also affected by landslides is Provincial Road 67, which has been closed to traffic.

A state of alert remains throughout Valsassina, Valvarrone and the centre of the Lecco branch of Lake Como, already affected by floods in recent weeks.

Bolzano has also been hit by a violent storm with 27 millimetres of rain (per square metre) dumped on the city in less than 20 minutes.

The storm was accompanied by strong wind gusts of up to 75 km/h, which downed trees, causing damage to roofs.