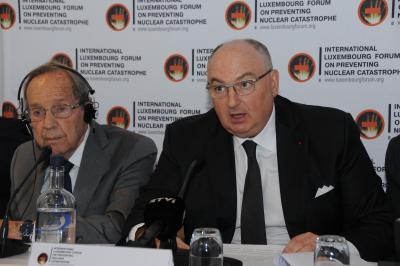 ROME - With nuclear treaties being dismantled and bilateral dialogue unravelling, the danger of a nuclear catastrophe is higher today than it was during the Cold War, a former US defence secretary has warned.

William J. Perry, who was defence secretary under President Clinton, told a nuclear conference in Rome recently that the Bulletin of Atomic Scientists had quantified the risk of a nuclear conflict by setting its nuclear disaster clock at two minutes to midnight for a second year in a row.

That was "closer to catastrophe than any year of the Cold War except 1954," Dr Perry told the conference.

Dr Perry said the "new abnormal" saw the Trump administration reversing 50 years of bipartisan US policy that sought to limit the cost and danger of the nuclear arms race through bilateral treaties with Russia.

"For the Trump administration the new normal is to not negotiate any new treaties and systematically withdraw from the treaties that existed when they took office," Dr Perry told a forum on nuclear security founded by the Russian-Jewish entrepreneur Viatcheslav Kantor.

Dr Perry cited the Trump administration's announcement that it was withdrawing from the INF (Intermediate-Range Nuclear Forces) Treaty -- "probably the most significant arms control treaty ever negotiated" -- and apparent intention to let New START expire in 2020.

"If that happens, there will be, for the first time in almost fifty years, no agreed limit on nuclear weapons; and there will be no bilateral talks underway on how to limit nuclear dangers.

This has become the new normal for arms control treaties, which I call the new abnormal, and it has happened in just two years," Dr Perry said.

Dr Perry said President Trump was not the only one to blame for this unhappy state. "I believe the actions of President Putin have contributed significantly, especially concerning the INF Treaty," he said.

The new abnormal was aggravated by the absence of regular dialogue to deal with geopolitical disagreements, he added.

The most likely nuclear threat was a terrorist attack on a city using a nuclear weapon, Dr Perry said, speaking during a break in the conference. "There is very little preventing that from happening and there are some terror groups that are trying to make it happen," he said.

Less likely, but with graver consequences, would be a regional war between nuclear-armed powers in Korea or between India and Pakistan, with tens of millions of deaths and several years of nuclear winter. Least likely but most catastrophic would be a nuclear exchange between the United States and Russia.

"If you go back to World War I, everyone used all the weapons available. Then we had only machineguns and poison gas. They used them all and only managed to kill 25 million people, because the weapons were crude," he said. "Now we're talking not about 25 million but 250 million and the end of civilisation."

Dr Perry acknowledged that the dangers of a nuclear war were no longer high on the political and media agenda and that the public had little understanding of its potentially cataclysmic consequences.

The International Luxembourg Forum on the Prevention of Nuclear Catastrophe, founded by Dr Kantor in 2007, has provided regular briefings on its work to political leaders, but to little avail. Now the organisation is considering how to get its message across directly to the public via traditional and social media.

In a written message to the conference Dr Kantor called for the creation of an international system for tracking the movement of radioactive materials and a coordination centre in Europe where "intelligence services of the major powers could work together on a permanent basis."

Dr Perry is pressing for the United States to abandon it first use policy on nuclear weapons and to revoke the president's power to use them on his sole authority.

A photo of the military aide responsible for carrying the presidential nuclear "football" mingling with guests at Mr Trump's Mar-a-Lago resort did little to boost confidence in the system.

Dr Perry sees that unsettling perception as an opportunity to strengthen nuclear safeguards. "It's a wild west out there. Not with revolvers with six bullets in them, but with nuclear bombs," he said.

"I'm a guy that sees the glass half full. To me, the kind of intemperate leaders we have today gives us a vehicle for communicating to the public how dangerous this situation is," Dr Perry said.

"People can relate to the idea that when a Donald Trump has his finger on the button it's a dangerous situation. They can imagine, even if they support him, that he could take intemperate, impulsive actions."