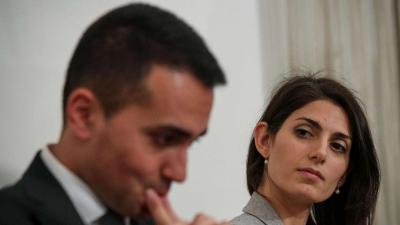 ROME – Mayor Virginia Raggi is forging ahead with her scheme to relocate ‘street stalls’ despite Minister of Economic Development Luigi di Maio’s request for her to abandon the “decorum plan” for the Municipality of Rome.

In the face of yet another episode overflowing with tension in a seemingly complex relationship with Rome’s mayor, an M5S internal conflict has officially been denied especially as the Deputy Prime Minister is also the movement’s political leader.

The “decorum plan” began on Thursday when Rome’s first citizen went to Viale Regina Margherita, between Policlinico Umberto 1 and University City (Sapienza’s main campus), to present the “liberation” of the sidewalks from the numerous stalls that had for years been populating the streets, many of which had been, among other things, occupying parking areas 24-hours a day.

“We’ve carried out a necessary job without delay, because the souks arranged on the sidewalks can no longer be tolerated, especially close to hospitals or railway stations,” Ms Raggi said in the company of the President of Rome's Municipio II area, Francesca Del Bello, a member of the Democratic Party (PD).

But on the same day, according to unconfirmed rumours, a call came from the cabinet of the Ministry of Economic Development (MISE) – under the direct leadership of Luigi di Maio – demanding the relocation be stopped.

“At least for the moment,” ministerial sources said.

There is a need on the part of the Minister of Economic Development to “strengthen the dialogue and participation of stakeholders to guarantee all the necessary safeguards without causing any shock in the sector,” ministerial officials were quoted as telling RomaToday.

The motive appears to lie in the ongoing dialogue between the government and industry associations “to redefine the rules at national level.”

The M5S has always been against the application of the EU 123 directive of 2006, better known as “Bolkestein,” the tool used by the Municipality of Rome to start the “decorum plan.”

In an interview with Radio Radio, the mayor included decorum among the solutions that in her view would suggest “the city is back on the move.”

“We did something historic,” Ms. Raggi said – a sentiment echoed by President of the Capitoline Commerce Committee Andrea Coia.

“Our work and that of national leaders is at different levels. We rely on existing regulations and we want to move forward because the Roman situation is unparalleled in the rest of the territory,” Mr. Coia said.

“If a new law arrives we will adapt, but we must always foresee the possibility of making announcements and resolving the current chaos.”

This isn’t the first time Mr. di Maio has tried to stop the Capitol in terms of street stalls. Last May, a few days before the European elections, he forced the M5S majority to withdraw Mr. Coia’s draft proposal, which envisaged the transformation of rotating stall posts into fixed positions.

The aim of the measure was to try to restore order in Rome’s Historic Centre, also in light of the investigation opened in January by the Rome Public Prosecutor, which involves some members of the Tredicine family, who have an historic hold on street selling.

Within a few hours of the presentation in Giulio Cesare hall in the Senatorio Palazzo, however, the bill was shelved and hasn’t been re-proposed.