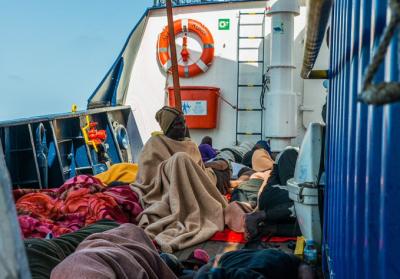 The boat’s crew were notified of the veto by Finance Police who climbed aboard, delivering the message to the migrant rescue ship’s captain.

Mr. Salvini has railed against the NGO, firing warning shots at Germany.

“German government forewarned is forearmed, ONG forewarned is forearmed,” he told Sky TG24.
“If they enter Italian waters we will take possession of that boat. Are we playing snap? Enough, I’m sick of it. The ship will be seized and we will board.”
On board the boat are 40 migrants including three children and two women, one of which is one pregnant.
Head of the mission Barbara Held said one of the children had even sustained a 10-centimetre gunshot wound to the shoulder.
“We are going to Lampedusa and I hope we will find a safe haven that is definitely not in Libya,” Ms Held said in a video posted on the organisation’s Twitter profile.
“The rescued people told us they would prefer to drown in the sea, before returning to Libya.”
Sea Eye spokesperson Gordon Isler said, “It is not our job to enter into conflict with the Italian government,” assuring that the crew’s intention is not to exceed the limits of the territorial waters, despite the critical situation on board.
Shortly after the Interior Ministry had learned of Wednesday’s rescue, it had made it known that there would not be any ports open to the German NGO ship, with the ban on entry into Italian waters, signed shortly afterwards.
“If the ONG really cares about the health of the immigrants, it can set its course towards Tunisia,” Mr Salvini said Thursday evening. “If, on the other hand, it thinks of coming to Italy as if nothing was wrong, it has the wrong minister.”
cc
Rome
World
Italy