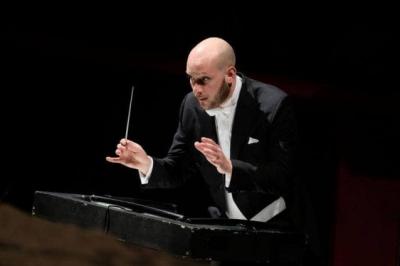 MARTINA FRANCA – A 29-year-old Japanese opera singer accused of persecuting an Italian conductor for eight months, has been arrested in the province of Taranto, Apulia, for stalking the musician.

Aiko Miyamoto was Tuesday placed under house arrest in a therapeutic community by Martina Franca police after trying to approach maestro Sesto Quatrini in violation of a court order forbidding her to approach him or his family members.

The young mezzo-soprano, a student living in Milan, had been persecuting the conductor with threats and sudden appearances in front of theatres around the world. According to police investigators the woman had fallen ‘madly’ in love with maestro Quatrini – one of the most successful composers and conductors in the world of opera.

In recent days, the Rome-born conductor revealed he had fallen victim to the alleged stalker in a Facebook post.

“I met Miss Aiko in June 2018 at the Becanto Rodolfo Celletti Academy in Marina Franca. She was a cover singer, a sort of ‘reserve.’ There was a public rehearsal with other musicians, I had no other opportunities for interaction.”

This was just the beginning of his nightmare.

“A few months later I was at the Fenice in Venice, where I had directed La Traviata. At the end of the show I found her in front of the dressing room. She claimed that "a special energy" had been created between us. I burst into laughter and said goodbye. Before leaving she said, ‘You don't know how much I can hurt you.’ Unfortunately that’s how it went down.”

A few days later the maestro was invited as conductor to Las Palmas, Island of Gran Canaria.

"She showed up at the theater, she told me – ‘Destiny has brought us together again.’ I began to be afraid. She insisted on having my cell number. I gave her the email, to have written testimonies of these persecutory acts.”

Meanwhile, police have also arrested a man who had been sending threatening and defamatory messages via Facebook to Giorgia Meloni, leader of the rightwing Brothers of Italy party.

The man was put under house arrest Wednesday in Trentola-Ducenta, in the province of Caserta.

“I have to thank the police because they noticed it before me, I found out from them, they did their job very well indeed,” Ms Meloni said.

The man, who had recently been stopped by police at Rome’s Termini station, had admitted that he had come to Rome from Campania to find out where Ms Meloni lives.

And in Torpignattara, police have arrested a 31-year-old Roman woman who has, for months, been stalking singer Fiorella Mannoia.

The fan-turned-stalker showed up at Ms Mannoia’s home in the middle of the night between Monday and Tuesday and began screaming and continually buzzing the security intercom system before trying to break through the door with a bench.

The actress, who had kept the fan’s behaviour secret, was forced to alert the police, leading to the alleged stalker’s detention.