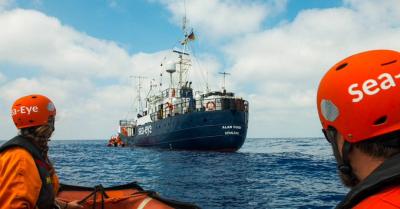 The migrants – among them a baby, two toddlers and a pregnant woman - said they left overnight on a boat from Tajoura, east of Tripoli, German media reports.

According to the Sea Eye the migrants are from Nigeria, the Ivory Coast, Ghana, Mali Congo and Cameroon.

“From a geographical point of view, Lampedusa is the closest safe place. In the next few hours we will see how it moves forward.”

Matteo Salvini has already made it known, as he has done on other occasions in which NGO ships were involved, that he would have signed an entry ban, as permitted by the Security bis decree.

"It is a German NGO, we all know where they can go, certainly not in Italy," said the Italian Interior Minister who went on to describe NGOs as “a continuous provocation, disobeying Italian laws and, in fact, attacking the Italian government."