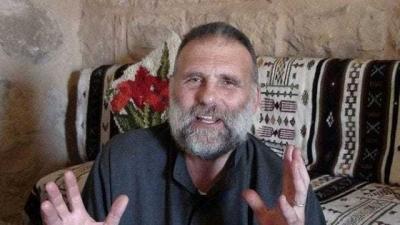 ROME – Some six years after the disappearance of Father Paolo Dall’Oglio, the Jesuit priest from Rome who was kidnapped in Syria in 2013, his family insist that he may still be alive and call for further investigation.

“The latest news? We have had no confirmation, either that he’s alive or dead,” said Father Dall’Oglio’s sister Francesca at a press conference Monday, while her brother Giovanni reflected that without proof either way, “hope is legitimate. We still believe in him.”

“For six years, we haven’t managed to find out what happened to our brother,” said Francesca, calling for renewed efforts to search for him. “A man who is a Jesuit priest, an Italian citizen. It’s true that there is war in Syria, but Raqqa has already been freed from Isis and now it is occupied by Nato allies.”

Francesca, Giovanni and their sister Immacolata all spoke in turn, remembering with fondness and emotion their brother whom many have written off as dead. They described the possessions they have which belonged to him, and called for “more transparency and coordination” in the work of Italian investigators.

“He was doing what he needed to do,” said Giovanni in reference to Paolo’s work in Syria. He always put others first, and loved the “Islam of mercy” while following Jesus Christ.

“The Dall’Oglio family has every right to ask if everything possible has been done in these last six year to find Paolo. For the last year and a half, it has been possible to enter Raqqa,” explained Italian Amnesty International spokesman Riccardo Noury at the same press conference. He drew attention to the particular pain of living without knowing a loved one’s fate, and pointed out that Dall’Oglio’s case was not unique.

Father Dall’Oglio worked for some 30 years in the Mar Musa monastery that he had himself established some 80 kilometres north of Damascus. An constant advocate of interfaith dialogue, in particular between Muslims and Christians in Syria, he was kidnapped July 29, 2013, by militants of the Islamic State of Iraq and the Levant (ISIL) in Raqqa.