No luck in search for Vatican schoolgirl Orlandi 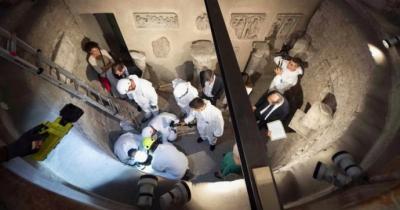 The ossuary in the Teutonic Cemetery. Credit: Il Fatto Quotidiano

VATICAN CITY -  The search for the remains of Emanuela Orlandi, the Vatican schoolgirl who mysteriously went missing in 1983, was once again frustrated as experts revealed that the most recent bones to be tested date to no later than the 19th century, according to Vatican sources.

The bones, from ossuaries in the Vatican’s Teutonic Cemetery, were tested after investigators opened two tombs in the graveyard earlier in July but found them empty, contrary to expectations. The tombs were supposed to be the resting places of two German princesses.

The tests were carried out by Prof. Giovanni Arcudi, an expert in forensic anthropology and professor in legal medicine at Rome’s Tor Vergata University.

“Prof. Giovanni Arcudi, assisted by his staff and in the presence of an expert appointed by the Orlandi family, has completed morphological analysis of the finds from the ossuaries (several hundred partially intact bone structures and thousands of fragments). In the course of the forensic anthropology investigations, Prof. Arcudi found no bone structure dating to the period after the end of the 1800s,” said the Vatican press office.

Orlandi disappeared aged 15 on her way home from school. The ongoing mystery over her fate is notorious and many have criticised the Vatican’s historic lack of cooperation. The decision to allow the tombs to be opened, followed by the ossuaries, was welcomed by Emanuela’s brother Pietro Orlandi.

At the time of the excavations of the tombs, he said: “All this is to verify whether there could be internal [Vatican] responsibility [for the disappearance]. It is a change of position which admits a possibility until now always denied. Finally, after 36 years, there is concrete and fair collaboration that I really appreciate.”

The Vatican was eager to address such criticisms. “The Holy See confirms its desire to seek the truth about the disappearance of Emanuela Orlandi and categorically refutes that this attitude of full collaboration and transparency could in any way indicate, as some have at times said, an implicit admission of guilt,” said a Vatican spokesperson.

The Orlandi family lawyer had received a tip-off in an anonymous letter telling them to "seek where the angel indicates," leading to excavations at the so-called “Tomb of the Angel,” resting place of Princess Sophie von Hohenlohe, who died in 1836, and at the adjacent tomb of Princess Carlotta Federica of Mecklenburg, who died in 1840.