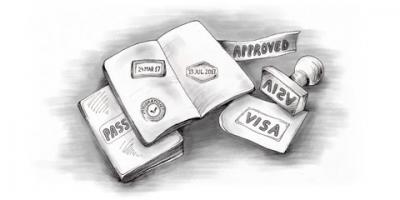 Gary Celima was born in New York City and lived there until retirement. He has always considered himself Italian, but found moving to his homeland later in life a bureaucratic nightmare. In this article, he shares a personal perspective on the challenges facing first generation immigrants wanting to move to a home they have coveted their whole lives, and the sense of betrayal he feels on behalf of his parents and grandparents.

It is not uncommon for New Yorkers to describe themselves by the nationality of their parents or grandparents. I always described myself as “Italian.” It made sense because all my grandparents and my father were born in Italy, and even continued to speak in Italian dialect.

And I grew up proud to be Italian. We ate nothing but southern Italian food, took lunch every Sunday at my grandparent’s house at 2 or 3pm. (It was unheard of for Americans to eat lunch so late.) Only their local Italian dialect was spoken around the table with my aunts, uncles, parents and grandparents. I felt more Italian than American, which is not uncommon in New York, whether one is of Irish, Italian or other ancestry.

I believed that being Italian meant ‘family, food and blood’. Even the Mafia guys would exchange blood when they were initiated. Blood brothers, right?

After I retired, I felt the pull of my Italian roots. After all, I had at least 60 cousins living in Italy, many still in the same town where my father and grandfather were born, not far from where my mother’s parents were born.

I was heartbroken to find that I could not easily move to Italy.

To became a citizen of the U.S., you had to renounce your Italian citizenship in the period before the dual citizenship was initiated between the United States and Italy in 1992. It made little sense that this should be held against me.

The conditions of my being granted a “residenza elettiva”, which signifies permission to live in Italy for the rest of my life, came at a cost. I had to prove that I would bring money into Italy, which I could do with my pension, and to agree not to work here. I had to prove that I could pay in full for any doctors’ visits and medicine that might be necessary in the course of my time in Italy. I also pay the government every two years for the privilege of living here. And it is a privilege.

I moved to Italy, but after years of attempting to get my citizenship here, I have all but given up.

I spend years gathering documents (including my grandmother’s Italian passport from 1929), sending them off to my local government in Italy and to New York consulate, and waiting for responses. I was trying to prove that my father had been an Italian citizen, but was eventually told that records of citizens renouncing their citizenship was only kept since 1992, the period in which renunciation became a choice rather than a legal requirement to obtain citizenship.

Finally, after all this I was told it would have been better if my father was born in the United States of America rather than in Italy. Knock me over with a feather. So it is easier for a non-Italian to obtain citizenship than an Italian?

At this point, of my “Family, food and blood” belief, only food was still standing strong.

I was disappointed that others whose parents were not born in Italy and even some with grandparents not born in Italy had obtained citizenship in a matter of months because they hired an agency in the United States at vast expense that “knew the ropes”. I have since learned that it is easier to obtain citizenship through an Italian consulate in the U.S. than in Italy itself.

I felt prompted to draw attention to these difficulties not just to voice my disappointment but also on behalf of my Italian grandfather.

He fought for Italy in the Great War, in which he was captured and interned in a prisoner of war camp. He was never the same after his experience, I was told. To me he was always Saint Joseph, calm and sweet. He would eventually receive shock therapy in the 1950s.

How can such little consideration be given to individual cases? Italian bureaucracy has become crippling, with people fearful to act as individuals. Because of this, a great disservice is being done to many people like myself, but a greater disservice and disrespect is being done to my grandparents’ good name. They fought for this country and are now forgotten.

Italian blood cannot be legislated against. It is given from one generation to the next. I will always have Italian blood, no matter what the regime here in Italy denies me.

When a country that claims to be steeped in tradition disrespects its war veterans, then it is a country without moral fibre. When you deny the continuation and the connection of blood, you deny your own history.