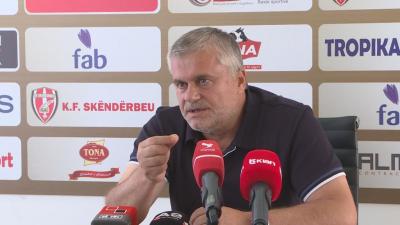 Ardian Takaj is the president of Albania’s most successful football club in recent years, KF Skënderbeu Korçë. The club, which is based in south eastern Albania and which was the first to compete in the Champions League in the history of the country, was given a 10-year ban from playing European football and a one million euro fine by UEFA on the basis of alleged match-fixing during the 2016-17 season. Rather unusually, to make the decision UEFA used data analysis through their Betting Fraud Detection System (BFDS), rather than direct evidence of match-fixing.

Takaj addressed the future of the club during an urgent press conference, openly attackeing Eduard Dervishaj, the ex-general secretary of the Albanian Football Association who for years been working for the Spanish Football Association, and railing against the sanctions imposed by UEFA. He spoke at length, voicing indignation at the fact that “experiments” with data analysis are carried out on Skënderbeu simply because it comes from a small country.

This is some of what he had to say.

“All files shall be published, as we know we are powerless against UEFA. We are not dealing with a punishment by UEFA, it is a punishment by particular people. Each witness will give evidence anonymously. There isn’t a single letter or person to have reported anything.”

And with regard to Sportradar, a multinational company based in Switzerland that collects and analyses sports data: “That is a gambler… If we were in a big country, we would not be punished. How can it cross your mind that Sportradar has been monitoring Skënderbeu for ten years, when you don’t have to commit a crime several times, to kill 15-20, in order to be proclaimed guilty. Skënderbeu was sacrificed for money. And the problem is that we are part of a small country, so they can experiment and do anything they please.”

Continuing to discuss UEFA’s experimentation on Skënderbeu, Mr Tajak drew attention to irregularities in the case as he saw them. “Why were we not sentenced in Belgium? Are you aware of a sentence in Spain by UEFA? Reliable sources have showed that the threatening e-mail came from Tirana, not Korçë.  It is clearly stated in UEFA Regulations that in order for a football club to be sentenced, the president, the football players or the staff must be found guilty. In the case of Skënderbeu, there are no participants to be blamed.  A football club is proclaimed guilty and there isn’t a single author to have committed a crime. If I was sentenced personally, I would accept it.”

“Where a whole city is sentenced, the supporters of a club - who are the best to us - are sentenced. Fans of Skënderbeu travel 300 kilomentres, 12,500 of them, to the Elbasan Arena – like no other club. I owe a moral obligation to them. I will keep on with the project of [running] Skënderbeu. That town will have a football club of high standards.”

He then turned to the million euro fine the club faces, one of the harshest ever handed out by UEFA. “The fine is not well studied or fairly considered. The two people who have dealt with Skënderbeu’s sentence can’t have thought it through enough. Eduard Dervishi has the keys of the office... Our office and attorney have taken it to the Federal Court. The Federal Court deals with the evidence. For now, our office has handed ovre the letter for KAS, [and] has done that for the Federal Court as well.”

Takaj explained that the Swiss Federal Court will give its decision next June. Until that time, the club must remain open and operational: “We lose the liability to proceed with the issue if Skënderbeu does not exist. The next season will start regularly. The football players have a warranty, their finances will not be affected. We are able to plan a good season. There is no money freeze by UEFA... The most important goal is that Korçë shall have football, it shall have the club and shall successfully perform this coming year.”