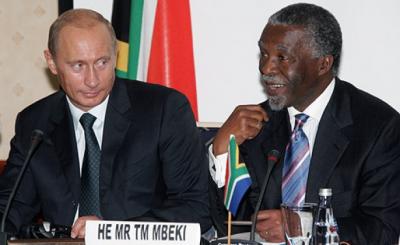 ROME – Amongst the personified state-characters of international relations analysts, everyone is “interested” in Africa. The reasons for the interest appear clear to many, whether they are in reality or not, but the tone of the story depends greatly on who you ask.

The world’s “youngest” continent looks vibrant and intoxicating and, above all, promises future affluence. China and the US, at the top of the international food chain, get first-pick. Beijing invests unimaginable sums in infrastructure and the American dollar reigns supreme.

Assiduous Russia, though, is also becoming increasingly involved in parts of Africa. And unlike many of her international rivals, she enjoys something of a historic clean-slate.

The Russian Orthodox Church’s missions to Africa date back a millennium. And though perhaps sharing thin veneer of proselytising care, Moscow was never involved in the late 19th century Scramble. Also known as the Rape of Africa, the period of so-called New Imperialism saw some 90 per cent of the continent come under the control of foreign powers concerned with, for the most part, resource extraction.

Indeed, it was not until the Cold War that Russia developed formal diplomatic ties with African countries, its post-war direction reaching something of a “Golden Period” in the 1960s. This international outlook, imposed by the necessities of the struggle against American capitalism, receded in the more parochial Boris Yeltsin era of the 1990s following the fall of the Soviet Union, when nine embassies and three consulates closed.

But the briefly cold relations were re-defrosted in the warming atmosphere of Vladimir Putin’s sly ascendency in 1999. He understood early, perhaps better than his predecessors, the necessity of maintaining spheres of influence in a globalised, increasingly mercantile world.

Since 2010, Russia has attempted – at least, according to the analysis of western commentators – to present herself as an alternative to the binary paths of Chinese or American alignment facing African leaders. Like China (and notably unlike the U.S. and Europe), Russia does not concern herself with the internal politics of the countries she deals with. Most of her interaction would be classed as “economic,” centred around energy and minerals, rather than “political.”

There has been military engagement too. For example, Russia has military partnerships with Ethiopia, Nigeria and Zimbabwe.

Putting aside the difficulties in talking about “Africa” as a unity (as an idea?), apparently the sort of thing we are meant to consider is whether Africa is the “continent of tomorrow” or, in fact, already “the continent of today.” Discussions like that held at the Euro Gulf Information Centre (EGIC) in Rome Thursday, “Global Africa: Power Politics on the Continent,” risk becoming - save for the occasional aside - a competition to see who can be more excited about the “young” continent.

“What an exciting time for Africa!” we are told.

“I share a positive approach,” says Natalia Piskunova, senior lecturer at Moscow State University, referring to an ebullient talk just delivered by fellow speaker Andrea Spinelli Barrile, a journalist who specialises in Africa. Both are learned and well informed. They discuss, among other things, the long-term direction of the African economy and her international and internal partnerships. Barrile jumps from one country to another with admirable zeal and enthusiasm. Piskunova talks about the past, present and future of Russian involvement in Africa.

Opportunities for trade are everywhere, and everything is great.

It is easy to see why global powers are interested in Africa. The continent has the youngest median age at 19 years old, and will reach some 2.5 billion people by 2050 but not peak until 2100. So the “potential” - in terms of natural resources (especially precious minerals), human resources and trade - is enormous. Economically, Africa is set to explode.

And yet something is missing from this story.

A young lady in the audience stands up at the EGIC event. Politely, she asks whether it might be helpful to hear from someone who is actually from Africa. The discussion has after all touched on questions of “narrative.” How can Africans become the subject, rather than the object, of narratives if they cannot contribute to their own storytelling?

And suddenly, the beautiful young Africa we have been hearing about threatens to shatter.

From the sundry and diverse viewpoints of those who actually inhabit any of the 54 countries, the outsider’s narrative can be hard to recognise. Some countries are exploding culturally and economically while others struggle under the burden of poverty, frequently the result of the Ur-colonial legacies like economic imbalance because of an underdeveloped industry and an overreliance on the primary sector.

Moreover, the celebrated “interactions” with the rest of the world can take on a sinister air when seen from the other side. Is it possible that international aid could hold back development in the long term? Or that “infrastructure development” could have a purpose which is not entirely altruistic?

It wasn’t that the EGIC speakers had failed to appreciate the problems of perspective (both agreed it would be better to hear from someone with “real” or “lived” experience of the place) but there had been no discussion, at all, of the problems implicit in unequal economic relations.

“Neocolonialism” is the umbrella term for these issues: in a word, how former colonial powers exercise control over their former colonies, liberated technically or in theory but still fundamentally reliant on former overlords. The word was coined by Jean-Paul Sartre in 1964. Generally, the concept is used to talk about the economic and cultural control mechanisms which have replaced direct military and political intervention. Often the former colonisers propagate, through subtle means, a capitalist and neo-liberal agenda that ensures the former colonies remain to all intents and purposes dependent on them.

Well, what about countries which have no colonial legacy? (Or at least, not a relevant one – Russia had an unofficial, small and short-lived colony, Sagallo, in late 19th century Djibouti.)

Russian, and for that matter Chinese, involvement in Africa is obviously not an innocent exercise in giving aid or developing under-developed areas. It is hard to imagine so much enthusiasm for African involvement if the superpower in question was a former colonial power. The parallels would be too explicit.

It is easy to get carried away by excited discussion about African growth and youth. But what about climate change and the human cost it is likely to exact, or civil wars which can last half a century in a corrupt and fragile political environment, or the ecological problems in much of the infrastructure development? (China in particular has been harshly criticised for widely ignoring the last of these.) Have we learnt nothing from a history where outsiders imposed a narrative without ever pausing to listen to those who lived there?

If Russia and China are running through the colonial chapters of the past – and I leave it to you to investigate that – are we meant to withhold judgement for the sake of enthusiasm?

Africa is a good case study for many of these issues because it is hard to talk or write about outsiders’ involvement in the continent. (Is “involvement” neutral enough?) Larger narratives always take over.

“China’s Marshall Plan,” the Belt and Road Initiative, signals for many the existential threat that the inexorable rise of the communist state presents, for example, and China’s role in Africa is frequently portrayed as overbearing. In the case of Russia, an old-school contempt, which frequently causes us to overstate her decline on the one hand or her danger on the other, drives a narrative which brushes over specifics.

Frozen in historic reflection and recriminating self-reflection, our attempts to come to terms with our own past may mean we miss much of the present. There are of course elements of truth, perhaps to a very great extent, but it should be banal to point out that these stories are never the whole picture. What is at risk is scrutiny of the details themselves.

We do not need to fit Russian or Chinese engagement with Africa onto a story about either of these countries, or into the straightjacket of the European colonialist model. We need to approach them with a directness that starts with the facts and comes to the bigger picture later.

Can we escape the power of “history,” the story which slots us neatly onto the end of a slowly unfolding process? Perhaps not. These are often our ways of understanding the world and our place in it. Whether we see Russia, or China, in Africa as involvement or interference, normal behaviour or dangerous self-promotion, may have been determined by events of decades past.

What we can always do, though, is to avoid the temptation of the broad brush, ever the prerequisite in our struggle to escape the impositions of history. How else, after all, are we to be the subjects rather than the objects of our stories?

“Global Africa: Power Politics on the Continent” was a talk held at Rome’s Euro-Gulf Information Centre on Tuesday July 16. The speakers were Natalia Piskunova, Senior Lecturer at Moscow State University, Senior Fellow at EGIC, and Andrea Spinelli Barrile, journalist with in-depth experience in and on Africa, co-founder of Slow News and Head of Communication at Italia Africa Business Week.