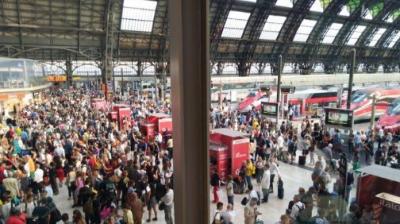 ROME – There is major disruption on train lines between Rome and Florence, with delays of up to four hours and problems expected to last well into Monday afternoon. Three fires at Rovezzano station in Florence may have been deliberately lit by anarchists, according to official sources.

Trains are running again after a suspension Monday morning from just after 5 a.m. to 8 a.m. while police carried out investigations. Some 25 trains were cancelled.

“According to initial investigations, the fire in the [rail] system which manages the movement of trains was caused by a malicious act of unidentified persons,” said a spokesman for the Italian State Railways.

Engineers from RFI are working to restore the cables and infrastructure damaged in the fire this morning. On particularly harmful fire was lit in an electrical cabin, while there were two others in manholes.

The average delay later Monday morning was 180 minutes and the whole of the high-speed rail system is experiencing difficulties, according to a spokesperson for Rete Ferrovia Italiana (RFI). There are repercussions on regional lines too.

According to one hypothesis among those investigating, the fires were lit by local anarchists.  There is currently a trial involving 28 alleged “anarchists” in Florence. Among the charges, they are accused of throwing “Molotov cocktails” at a Carabinieri barracks in Rovezzano. They are due to be sentenced Monday afternoon.

This would not be the first time the railway at Rovezzano was the site of “demonstrative action.” On Dec. 21, 2014 railway workers found an unexploded bottle full of fuel at the end of the San Donato tunnel, having already extinguished a fire in the electrical cockpit at the other end of the tunnel. Earlier in the month, they had found a gas canister on a crane involved in high-speed rail work. The incidents were never claimed by a group.