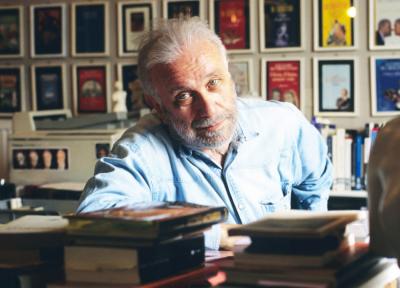 ROME – The renowned Italian writer and film director Luciano De Crescenzo died Thursday, aged 90, after being hospitalised in the Eternal City two weeks ago with pneumonia, according to his publishing house Mandadori.

“The actor and director Luciano De Crescenzo died today, Thursday 18 July, at around 4 o’clock at the Policlinico Universitario A. Gemelli IRCCS as a result of complications from a serious illness,” said a hospital source. “His family and dearest friends were with him in the final stages of his illness.”

Born on 18 August 1928 in Naples, De Crescenzo worked for IBM until, aged 48, he published his bestselling Così parlò Bellavista (Thus spake Bellavista), a collection of anecdotes about his beloved hometown. It proved enormously successful, capturing and conveying to its audience the textures and charms of life in Naples.

A few years later, he directed a film adaption of the book, in which he played the protagonist, but it was always his literary works – rather than his work on the big screen or on television – for which he was best known.

In the following years, De Crescenzo produced numerous other publications, including novels and popular books on Greek philosophy, which sold enormously well both in Italy and around the world. The Neapolitan engineer over the course of his life sold more than 20 million books, which have been translated into some 25 languages so far.

Mayor of Naples Luigi de Magistris was one of many to pay homage to De Crescenzo: “I express my deep condolences and those of the city of Naples for the earthy end of the great Luciano De Crescenzo, a man of immense culture who knew how to best interpret the spirit of the Neapolitan people.”

“He was a man of extreme intelligence and enormous culture, and with a Neapolitan natural kindness. Naples and its people will miss Luciano dearly, we all remember him with immense affection and gratitude.”