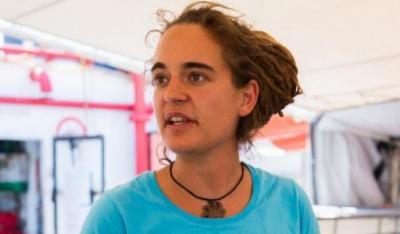 AGRIGENTO – Carola Rackete, the captain of migrant-rescue ship Sea Watch 3 who was arrested June 29 after forcibly entering Italian waters, Thursday morning faced questions from Sicilian prosecutors. Afterwards, she said she was “happy to have the opportunity to explain everything,” according to local sources.

The German skipper, 31, had forcibly docked in Lampedusa after two weeks at sea, having rescued migrants from a shipwreck on June 12 off the coast of Libya. She controversially decided to ignore a ban from Italy’s Interior Minister Matteo Salvini, who has a “closed ports” policy, and dock anyway. Cleared by judges on initial charges, who ruled that she was acting to save lives, Rackete is now under investigation for her role in disobeying a warship and allegedly aiding and abetting illegal immigration by picking up the migrants in the first place.

The Dutch-flagged ship itself, which belongs to the German NGO, is being held by police in the Licata port.

“I was very happy to have the opportunity to explain all the details of the rescue on June 12, said Rackete as she left the justice ministry in Agrigento after her interrogation, which lasted just under four hours. "I hope that the European Commission, after the election of its new parliament, does its best to avoid these situations and that all countries receive people who have been rescued by fleets of private ships."

A solidarity sit-in was underway Thursday morning in front of the Agrigento court, with one of the banners reading, “Saving lives at sea is not a crime.”