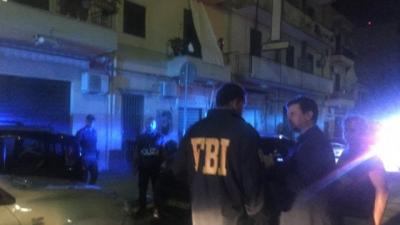 PALERMO – An large joint-operation between Sicilian police and New York’s Federal Bureau of Investigation (FBI) led Wednesday to the arrest of 19 people, including a Sicilian mayor, and revealed links between Sicily’s Cosa Nostra mafia and New York’s notorious Gambino family, according to police sources.

Known as ‘New Connection’ and involving over 200 police officers, the operation targeted the Passo di Rigano region of Palermo and the Inzerillo clan in particular, who epitomise the historic links between organised crime in Sicily and New York. Forced to flee Sicily several decades ago, members of the once enormously powerful family had come back from America to re-establish themselves.

One of those arrested is Salvatore Gambino, the mayor of Torretta, a municipality of Palermo. Also arrested were Francesco and Tommaso Inzerillo, the brother and cousin respectively of boss Totuccio Inzerillo. Police also searched the Staten Island home of Thomas Gambino, eldest son of infamous mafia boss Carlo Gambino.

The investigation has seized some three million euros so far, and those arrested are accused of various crimes including mafia-style criminal association, international association with mafia, aggravated extortion, aggravated financial fraud and unfair competition aggravated by mafia methods.

For over half a century perhaps the most powerful mafia family in the Sicilian capital, the clan was led by Salvatore “Totuccio” Inzerillo and had close links to his cousin, Carlo Gambino, in New York. It was destroyed in “The Great Mafia War,” which saw the Corleonesi family led by Salvatore “Toto” Riina violently sweep away the old families of the city in the late 1970s and early 1980s.

Salvatore Inzerillo was killed on May 10 1981 in Kalashnikov fire, and many of the family members fled to America. They were later granted a pardon by the Sicilian Mafia Commission on the condition that none of them return to Sicily, but in the early 2000s some came back to the family homeland.

The family are believed to have re-established themselves in Passo di Rigano since and a series of murders in 2007 seemed to announce an imminent new mafia war. Lead prosecutor Francesco Lo Voi explained: “We have struck at a particularly important area for Cosa Nostra, Passo di Rigano, which includes the mafia families of Torretta, Boccadifalco and Uditore. We found that those who had to leave in an exile imposed by Riina had returned to carry out criminal activity.”