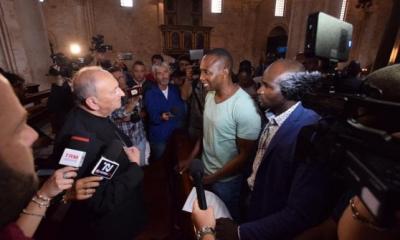 BARI – A group of migrant farm workers occupied Tuesday the San Nicola Cathedral, demanding proper accommodation instead of the “ghettos” they are currently forced inhabit in the Puglian countryside, according to local sources. They eventually left after receiving assurances from the archbishop.

Some 60 labourers of African heritage, many of whom come from the ghetto of Borgo Mezzanone, want an end to their current housing situation and demanded a meeting with the local archbishop. Organised by the Foggia USB Farm Workers Coordination, they were led by Aboubakar Soumahoro, a 39-year-old Italian-Ivorian, who explained, “We have entered the cathedral of San Nicola with a group of exploited labourers, forced to live in inhumane conditions.”

He went on, in a video posted to Facebook: “It is a fight against the indifference of the Puglian authorities and the current government, who are trying to change a social question in one about public security. In the countryside of the Foggia region, attacks on the “shacks” have continued, to sweep from the earth the camps of the labourers who don’t have an alternative solution.”

Pointing out that theirs fitted into a wider struggle by farm workers in Foggiano who live in ghettos, he asked for the dignity and rights that the workers are owed: “Pope Francis says that ‘work gives dignity to a man’ but, in fact, ours is a job deprived of dignity and rights. For this reason, we have decided to fight to regain the rights of the workers’ union, of accommodation, of social security and of work security.

“I will call the present of the region, Michele Emiliano, and I will involve the other bishops of Puglia, and then I will listen to Pope Francis,” said Archbishop of Bari Francesco Cacucci, reassurances which eventually led the labourers to leave. Calling the protests the “expression of the recognition of the right to human dignity,” he said he was glad to help.

After some three hours of peaceful occupation, the group left the cathedral and were taken back to their homes in buses.