Coexistence in Campania: an exhibition of ancient Greek art 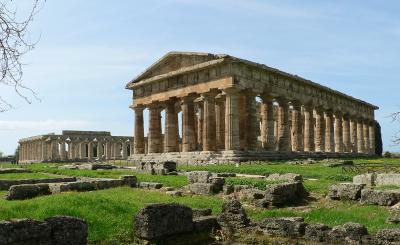 Temple of Paestum, Campania, perhaps the most recognisable sight from Magna Graecia

ROME – One of the richest collections of art from Magna Graecia, the world of Greek settlers in pre-Roman Italy, will once again be open to the public Thursday after break of some 20 years at the National Archaeological Museum of Naples (MANN). The gap is dwarfed, though, by the sheer antiquity of the fascinating objects on display, which reach back some two and a half millennia into a foreign and murky past.

Magna Graecia, “greater Greece,” is the name given to the realm of Greek-speaking colonisers who settled in southern Italy from the eighth century BC onwards. Bringing with them the Greek language and alphabet, and the varied facets of Hellenic civilisation, they were to have a formative impact on subsequent cultures of Italy, most notably on the Etruscans and the Romans.

The world of Magna Graecia was one of rich cultural synthesis and exchange, of technologies passed on and gods exchanged, of trade in goods and in ideas. Some 400 objects in the exhibition will pay homage to this motley and hybrid milieu, from rather unique sociopolitical arrangements and traditions to a religious and artistic syncretism.

It was common for Greeks to leave their homelands and sail to distant shores in search of better prospects and an easier livelihood. Southern Italy repeatedly proved an irresistible destination for Greek seafarers, and many of the cities founded there became rich and powerful. As a result, what they left behind was often breathtaking.

This new exhibition in Naples offers a glimpse into the early interactions between Greece and Rome. It pays homage to the power of cultural exchange and the rich artistic output under the stimulus of foreign cultures rubbing against each other.

Eventually southern Italy, and then the entire Greek world, was absorbed into the Roman empire. Old-world Greece however, though faded in political power, nevertheless mesmerised the new Italian superpower throughout its long life.

This was best expressed, as every advocate of the romantic Hellenic world over the brutal Romans will tell you, by the poet Horace: “Graecia capta ferum victorem cepit” (Greece, though conquered, captured the savage victor).

Magna Graecia will be accompanied by an audio guide. It is curated by Paolo Giulierini and Marialucia Giacco, and promoted by Electa. Part of the project is dedicated to Enzo Lippolis, director of the Science of Antiquity department at “La Sapienza,” the University of Rome, who sadly died last year.