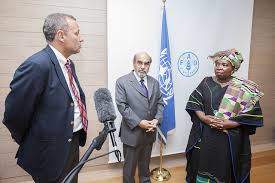 ROME –  A defense witness who worked in the communications department of the UN’s Food and Agriculture Organisation (FAO) gave testimony Tuesday in the trial at the Rome Tribunal brought by the UN agency against Italian Insider chief editor for alleged criminal libel. Judge Chiara Riva adjourned the trial until Friday so that a defense lawyer can be present to represent the interests of the whistleblower as she continues her testimony, judicial sources said.

Questioned by the defense attorney, Avv. Manrico Andreozzi and Judge Riva, Nancy McNally told the court how she was required to help her then-boss, Mehdi Drissi, blatantly rig the appointment of an underqualified candidate because of his Latin American political connections over two “much more qualified” female candidates.

Ms McNally’s testimony directly contradicts the evidence previously given by Drissi, who claimed that the job appointment was transparent.

Ms McNally, who worked in a number of roles within the FAO between 2007 and 2013, described how Drissi’s poor written English meant he demanded help from her in fixing the appointment in violation of UN rules and Italian law.

Drissi, who was then head of media relations in the FAO’s Roman headquarters, arranged the appointment of Juan Toha, the nephew of a Chilean Socialist politician, to be FAO’s Latin American press officer over other candidates from France and Venezuela, the court had previously heard.

Ms McNally described how she was required to help her boss work around the fact that, for example, in interview “[the candidate] didn’t even answer this question, or he answered that one very poorly” in contrast with the other candidates.

Judge Riva asked Ms McNally why Drissi had confided in her over the murky arrangements. “I don’t know,” she said. Her boss frequently invited her for dinner or tennis matches, even though she was married, she added.

Judge Riva said that Ms McNally needed to have a defense lawyer present in case her testimony could make her liable to being prosecuted for complicity in the job rigging operation masterminded by Drissi, now himself working as a Senior Programme Director at Latam headquarters of the FAO in Chile.

Insider chief editor John Phillips stands accused of allegedly tarnishing the reputation of the FAO and faces criminal prosecution under a Mussolini-era libel law. It is unusual for the UN to take individuals to court and Mr Phillips faces up three years or more in prison if found guilty, and massive legal costs.

French-Moroccan Drissi is one of five senior FAO executives bringing charges against Mr Phillips, of which four are seeking financial compensation. Also bringing charges are the outgoing FAO Director General José Graziano da Silva, whom Mr Phillips has accused of nepotism and corruption. Mario Lubetkin, Graziano’s chief-of-staff, has demanded not less than 100,000 euros.

The Insider has received support from numerous agencies around the world, including Reporters Without Borders (RSF). “We deplore the fact that the FAO and its director general have brought criminal proceedings against the journalist John Phillips and are seeking an outrageous sum in damages with the clear aim of getting his newspaper shut down,” said Pauline Adès-Mével, head of RSF’s EU-Balkans desk.

“As the mandate of the United Nations includes promoting and defending press freedom, it is highly regrettable that one of its agencies is suing a media outlet and its journalists in this manner.”

The trial resumes at the Rome Tribunal Friday at 9 a.m.