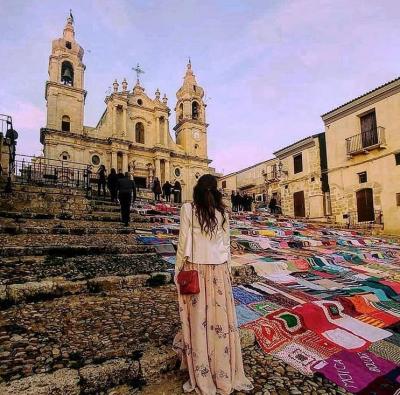 PALMA DI MONTECHIARO – A precious necklace was donated in secret to the Madonna of a small convent in Sicily by fashion behemoths Dolce & Gabbana. When the Bishop of Agrigento allegedly sent someone to steal it from the elderly nuns, they went public with the story, reports Il Fatto Quotidiano.

Fashionistas Domenico Dolce and Stefano Gabbana had held an exclusive exhibition of their collection of “high jewellery” in the small town in the province of Agrigento. When they gave a necklace to the nuns of the town’s ancient convent, they intended the private gesture to be a sign of devotion to the Madonna of Palma di Montechiario. But it wasn’t to be. There was one admirer of their work who evidently just could not resist having a piece for himself.

In the middle of the night of July 5, a mysterious character arrived at the convent. He said he was a delegate of the Bishop of Agrigento and, keeping the explanation simple, that “security reasons” dictated that the nuns must handover the necklace, which they did.

The convent custodians, though, have been looking after their treasures for centuries, keeping watch over the riches piled-up from donations to the Madonna for generation after generation. They have never had a robbery and nothing has gone missing before, so they were upset by the Bishop’s decision.

They refused to let the incident pass and revealed all to Leggo.

A councillor for the town Salvatore Malluzzo said: “If what is going around at the moment is confirmed, as far as I’m concerned, it will be an act of unprecedented seriousness. The necklace should remain in our town and nowhere else – no ifs, no buts.”

“The act of requisition on the part of the archiepiscopal church of Agrigento represents a real action of force, not to mention of offence, towards our community,” he went on.

There has been no official statement from the Church yet.