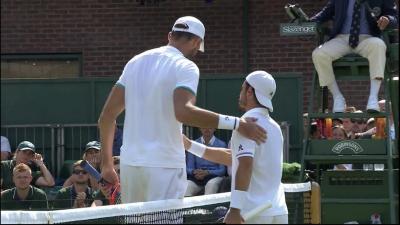 Fabbiano, 30, is building a name for himself at this year’s tournament. Having already defeated one of the most impressive young prospects in the tennis world, Greek player Tsistipas who is a decade his junior, Fabbiano repeated a gutsy performance over five sets to take down Karlovic.

The game at the All England Club lasted over three hours, ending 6-3, 6-7, 6-3, 6-7, 6-4 in the Italian’s favour. The Puglian’s delight at the victory was palpable as he celebrated with an ecstatic and loyal crowd of Italians on court 14.

Fabbian is just 1.73 metres tall, according to his official ATP profile, compared to Karlovic’s 2.11 metres, making him one of the tallest players in the sport. The Croatian also has a considerably larger reputation that Fabbiano. Known for a mammoth service game, he won eight ATP singles titles between 2007 and 2016, and despite his 40 years of age was the clear favourite in the match up with Fabbiano.

The diminutive Italian has been a professional since 2005 but has yet to make a final. His highest career ranking is 70th in the world.

None of that mattered on the court though, and Fabbiano showed he would not be intimidated. Key moments came when he broke the Croatian’s serve early in the third set, after losing the second, and at 4-4 in the fifth when a brilliant backhand saved the only break point Karlovic was granted.

Fabbiano will face Spain’s Fernando Verdasco in the third round. The left-handed Spaniard, 35, will prove a tough prospect. Currently ranked 37th, the high point of his glittering career came in 2009 when he was ranked world number seven. His semi-final loss against eventual winner, compatriot Rafael Nadal, in the 2009 Australian Open has been considered as one of the greatest Grand Slam semis of all time.