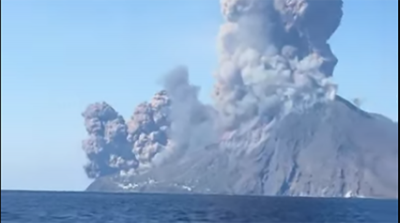 STROMBOLI, Sicily -- The volcano on the Sicilian island of Stromboli erupted Wednesday spewing out lava and rocks, sending terrified tourists and islanders out into the surrounding sea to escape the eruption, vulcanologists said.

At least one excursionist was killed after being hit by falling rocks on the brooding Aeolian island, police said. Massimo Imbesi, a 35-year-old resident of Milazzo, was walking with a Brazilian friend when he was struck, said the mayor of Lipari Marco Giorgianni. Mr Imbesi's friend was found in a state of shock and dehydrated, but not in danger of death, according to Il Messaggero.

The pair had walked to the crater of the giant volcano to appreciate the increased volcanic activity, which has been ongoing for some weeks now. At 16.46, however, an unexpected but violent eruption caught them off-guard, and in the face of smoke, flames and falling rocks they were separated. Imbesi was killed, and his companion called emergency services after he found his body.

The friend, known as Thiago, told La Repubblica: “We had met in the small port of Stromboli just today and had decided take a trip up the volcano. Then there was this terrible explosion, we got separated and afterwards I didn’t understand anything. I turned back to look for Massimo and I found him there on the ground, dead.”

Reactions from others on the island were varied. Some were seen jumping into the sea in panic, others barricading themselves into their homes. Some 70 people decided to leave the island and were evacuated, in particular from the small town of Ginostra which is most affected by the eruption.

Helicopters were engaged Wednesday night in fighting the blaze which had broken out on the small island as a result of lava flow. A military ship and a private boat were stationed beside the island as a precautionary measure overnight, in case further evacuations were needed.

The plume of smoke from the forceful eruption reached over two kilometres into the air and was visible from Sicily and Calabria.

Known as "the lighthouse of the Mediterranean," Stromboli's impressive volcano rises over three thousand feet above sea level. It is one of the most active volcanoes in the world, and has been in a state of continuous eruption for most of the twentieth century. The last major eruption was in 2002, when six people were injured.

But big and dangerous eruptions like this are unusual. “These are quite rare phenomena because Stromboli is characterised by constant but low-level [volcanic] activity,” explained the director of the Etna Observatory, Eugenio Privitera.