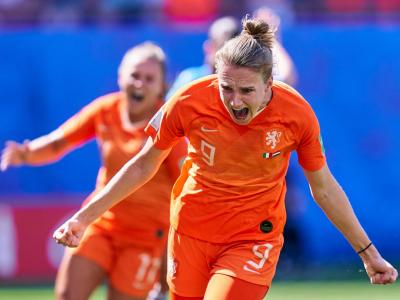 VALENCIENNES, France – Italy’s remarkable run at the Women’s World Cup was brought to an end by a strong Dutch performance. Le Azzurre return home with heads held high, though, having gone further than any other Italian women’s team in the past two decades.

Second-half goals from Vivianne Miedema (70’) and Stefanie van der Gragt (80’) sealed a match where both teams had to contend with extremely high temperatures. The Netherlands, who are current European champions, will compete in the semi-finals for the first time against either Germany or Sweden on Wednesday.

The Italian women matched their counterparts in the first half, but as time went on the Dutch showed their class. Two set-pieces and two-headers were the difference: Miedema glancing in one from Sherida Spitse’s free-kick, followed by another header, this time from van der Gragt, from another Spitse free-kick.

It was the 61st international goal for Miedema, just 22-years-old, who is the Netherlands’ top goal scorer, and the fourth goal set-up by Spitse, the most of any player in the tournament.

Italy had always been a surprise inclusion in the quarter-final stages, beating China 2-0 in the last 16 to claim a spot which marked their best performance in 20 years. They looked a little tired in the second-half (it was 34 degrees), but should return home to recover content.

They have certainly achieved head coach Milena Bertolini’s aim coming into the game. “We really believe this side has allowed the women's game to break new ground back home. We can see that from the viewing figures, what we see in the press and from the messages we receive.”

She explained after their game against China, addressing the status of women’s football in Italy: “I know cultural changes take a lot of time, but this team are able to break down some of those prejudices and they are enacting change and that's their mission."

The record domestic television audience for a women’s football game was trounced this year: the triumphant Italian team drew 36-times as many viewers in their game against Brazil in the group stages, where defied expectations to top Group C, according to analysis by the BBC.