Review: The Divo and the Duce 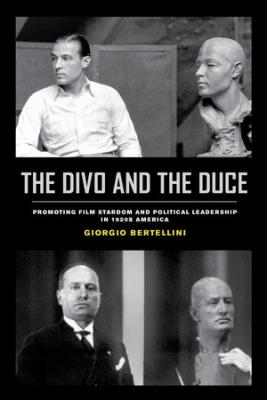 ROME - There have been many studies of Benito Mussolini and Rodolfo Valentino but Giorgio Bertellini’s ‘Il Divo and the Duce’ brings them together as celebrities whose seductive masculinity made a huge impact in the United States as well as in Italy. It also brings together cinema studies and politics with particular attention to the role of spin doctors, public relations people, biographers, newspapers and radio.

This was not the first time celebrities had advantages in the political sphere - in Great Britain, for instance, Prime Minister Benjamin Disraeli was a well-known novelist before his political triumph. But there were particular conditions in America in the 1920s and 30s.  The first world war had inaugurated collaboration between the government and Hollywood to boost patriotic fervor which revealed the potential of what was then called media ‘ballyhoo.’

Post-war, it was employed to augment the appeal of the Italian-born Valentino and Mussolini even though both championed strong leadership instead of democratic dithering and were misogynist. In the United States the vote had just been granted to women which boosted their self-esteem but Bertellini, a historian at the university of Michigan, points out that it was also the age of flappers, many of them keen to exploit their new freedom, perhaps with a macho foreigner.

Mussolini was presented not only as a moderniser who made the trains run on time, and an anti-Bolshevik who had rendered Italy safe for investors, but also as a Latin lover. According to an American journalist in Rome, Alice Rohe, he had ‘sex appeal’ even in his ‘abruptly ejaculated’ sentences.  Bilingual documentary films made him qualify as an actor called by one journalist the ‘Rodolfo Valentino of politics.’

News reels of pouting, jaw-thrusting Mussolini make it difficult now to credit his appeal. He had come to power in 1922 and two years later had taken responsibility for his henchmen killing the most eloquent Opposition spokesman Giacomo Matteotti. But much of his appeal in the United States and elsewhere lasted until the Italian invasion of Abyssinia in 1936. It lasted even beyond, because many in 1939 believed he could restrain Hitler or even oppose him.

His invented image had masked his political reality. That of the Italian-born Valentino also was distorted.  Bertellini illustrates this with a discovery about the 1926 Pink Powder Puff scandal in Chicago. The ‘Tribune’ published an anonymous editorial lamenting Valentino’s encouragement of installation of powder puffs in men’s toilets. Valentino responded indignantly to this slur and offered to prove his virility by boxing a bigger and more athletic man ‘Buck’ O’Neal. Valentino knocked him out.

Bertellini has found proof that it was all a publicity stunt arranged by a PR man, Victor Shapiro, because Valentino’s sequel to his most successful film, ‘The Sheik’, had not aroused much interest in Chicago.  The fake scandal changed that.

A few months later Valentino was rushed to hospital. When Shapiro read the news, he suspected it was a stunt arranged by a PR rival.  But Valentino died in the hospital.

Reality had intruded. However, two Fascist Blackshirts arrived at his funeral bearing a wreath from Mussolini and the shaping of the Valentino image had begun again.  In fact, it is difficult to yoke Valentino with Mussolini because, although in favour of strong leadership, he was not much interested in Fascism.

Among the many illustrations is a 1927 photo of Douglas Fairbanks and Mary Pickford, Hollywood’s most popular couple, with friends at the seaside in California, all giving the Fascist salute.

In 1933 Franklin Roosvelt came to power and, with his wife Eleanor, did much to counter the appeal of strong men such as Mussolini.

The book’s warning about the inroads authoritarian ideas can make in democratic societies is relevant in the Trump era when, in addition to the media ballyhoo of the 1920s, television and social media can trigger waves of indignation and hate. Although Matteo Salvini, Italy’s Deputy Prime Minister, a Trump admirer, says that he is against all violence, he favours extreme and aggressive right wingers. Another strong man proclaiming simple solutions to complex problems, he may prefigure not exactly a return to Mussolinian Fascism but something mean-spirited and callous.

The Divo and the Duce