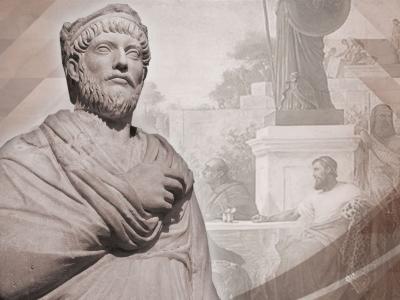 ROME - Flavius Claudius Julianus Caesar, often referred to as "Julian the Apostate", was born in Constantinople in 331 A.D. Orphaned as a child, he miraculously survived the internecine wars among emperor Constantine’s male heirs. Julian enjoyed a relatively obscure childhood in Bithynia (today Turkey), where he lived with his grandmother under the protection of Archbishop Eusebius of Nicomedia, and was taught by the renowned pagan scholar Mardonius, a slave of Gothic descent. Julian tells us that this remarkable philosopher and educator was the man most responsible for his way of life as a Caesar.

“Mardonius is the most responsible of all for my way of life... Plato, Socrates, Aristotle and Theophrastus. They convinced this old man, in his folly, and later, when he found me, since I was young and a lover of literature, he convinced me in turn that if I should strive to imitate these men in every respect, I would become better, perhaps not than other men, for the contest was not with them, but better than with my former self." (emphasis added)

It is in recalling his master Mardonius that Julian gives us the first piece of business wisdom: competition among men is unproductive inasmuch as the emotions of jealousy end envy driving it bring turmoil and weakness in our spirit, increasing - inter alia - the risk of disruption of team work which is so necessary in working towards a common goal. The only productive competition we should endorse, then, is the one with ourselves, in constantly bettering our individual characters as men and women in society.

Nonetheless, in my interpretation of the words of Julian and the teachings of Mardonius, this does not mean that we should become entirely oblivious to the qualities and successes of others, or cease being inspired by them in our constant striving to better ourselves. Fascinated by the works of Homer, the legendary author of the Iliad and the Odyssey, Julian in fact worked hard to imitate the cunning genius of Ulysses and the heroic feats of Achilles. In imitating this latter, he would in the end expose himself to unnecessary risk in battle and died after only twenty months of reign as Rome's last true pagan Caesar.

Julian gave us his last lesson in business wisdom on his deathbed. Aged just 32-years-old and fatally wounded by a Persian spear during the Battle of Samarra, in which he bravely but recklessly fought without wearing his protective coat of mail, Julian met his death discussing the meaning of life in the presence of his closest companions. Among these was the soldier and historian Ammianus Marcellinus, who would later recall the emperor’s last words:

"[The gift of life], I know well, was given to me, that I might not yield to great difficulties, nor ever bow down and humiliate myself; for experience teaches me that all sorrows overcome only weaklings, but yield to the steadfast... And yet success and well-laid plans do not always go hand in hand, since higher powers claim for themselves the outcome of all enterprises"

Julian thus anticipated by many centuries Nietzsche's famous quote, found both in his Twilights of Idols (1888) and Ecce Homo (1908): "was mich nicht umbringt macht mich stärker" ("What does not kill me makes me stronger"). He reminds us that strength in character rests upon the fears we face, which nevertheless quickly vanish before a strong will and determination to dominate and conquer them. Moreover success, as Julian recognises, does not rest entirely in our hands, but it is not entirely out of our hands either. We must carefully plan for success while recognising, at the same time, that all enterprises come with a degree of uncertainty which only a firm and resolute character will enable us to manage and overcome.