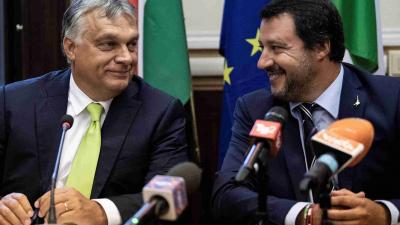 ROME – Deputy Prime Minister Matteo Salvini is considering a border wall to keep out immigrants on the model of America’s President Trump and Hungary’s Viktor Orban. The barrier would be erected along Italy’s border with Slovenia, reports The Times.

Mr Salvini explained his concern about the border: “The Balkan route has reopened… If the migrant flow does not stop we don’t rule out physical barriers on the frontier as an extreme remedy.”

Concern with land crossings mirror Salvini’s attacks on migrants arriving by sea, such the ongoing case of Sea Watch 3, currently moored off Lampedusa (more on that here). Italy’s new Security Decree, championed by Salvini, makes it much harder for boats to dock and threatens them with extortionate fines.

Salvini’s talk of a reopened “migrant flow” is hyperbolic, of course. Land crossings have increased a little but not greatly. The number of migrants, often Pakistanis, crossing the border from Slovenia has risen to 780 from a total of 446 last year, according to The Times.

Compare this with arrivals by sea from north Africa which dropped to 2,160 from 15,617 last year.

But Salvini is weaving a familiar narrative that has been used by President Trump and President Orban. Trump has vowed to build a wall along the Mexican border, a promise which he has struggled to deliver on so far.

Orban, on the other hand, has built a barbed wire fence on its border with Serbia. Salvini was taken on a tour of the wall last month, tweeting “In Italy, in Hungary, in Europe, you only get in when allowed!”

Of course, free movement of legal migrants is allowed between Italy and Slovenia, both part of the EU Schengen area. An EU source explained, though, that a barrier was in theory allowed: . “Being in Schengen does not preclude infrastructure on the border although the EU would not pay for it, and is not in favour.”