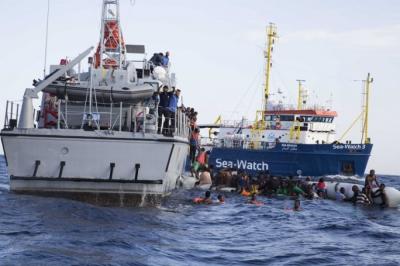 ROME – The European Court of Human Rights (ECHR) rejected an appeal from the search-and-rescue NGO Sea Watch to force Italy to allow migrants to disembark, according to sources at the interior ministry reported in Il Fatto Quotidiano.

The ECHR did, however, insist Tuesday that Italy “is expected to provide assistance to persons on board who are vulnerable because of their age or state of health.”

It had been hoped that this appeal would allow the ship to circumvent Italy’s new Immigration and Security Law which forbids docking, with the threat of extortionate fines.

Sea Watch 3, one of the rescue boats used by the German NGO to rescue migrants, has been at sea for over two weeks and is moored off Lampedusa with 43 migrants on board. Italy has rejected international calls to accept the migrants.

Deputy Prime Minister Matteo Salvini welcomed the news, according to Ansa. “[The court] has confirmed Italy's choice of order, common sense, legality and justice: ports closed to human traffickers and their accomplices.”

Salvini has been consistently opposed to allowing migrants into Italy, and has repeatedly called for a “closed ports” policy. He wants the migrants on Sea Watch 3 to be taken back to Libya, though opponents argue it is not safe to do so. Sea Watch has been supported in the past by the UN’s High Commission for Refugees (UNHCR) in insisting that it is illegal to send the migrants back to Libya because it is not a safe country.

Sea Watch originally had 53 migrants on board, but was permitted to send ten children and pregnant women ashore in Lampedusa. It rescued these from a shipwreck some 47 miles from the Libyan coast on June 12.

Last week, hopes were raised of a resolution when some 50 German municipalities declared that they would welcome the migrants. So far, nothing has come of the proclamation, and the German government maintains that this is an EU matter.