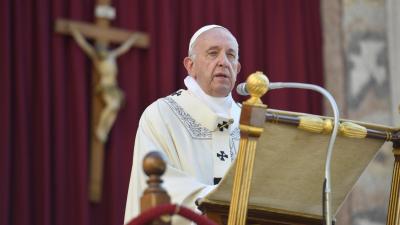 ROME – Pope Francis strongly condemned the physical and moral state of the Eternal City before a congregation at Casal Bertone on Sunday, reported La Repubblica. “Our city is starved of love and care. It suffers from neglect and dereliction,” said the 82-year-old.

While celebrating the Corpus Domini Mass at the church of Santa Maria Consolatrice on Sunday, the fourth pope in 75 years complained to the hundreds of assembled worshippers about “so many old people [living] alone,” and “families in difficulty.” He pointed out the hardship that young people face in trying to make a living: “[they] struggle to earn their bread and feed their dreams.”

The Pope is well known for addressing those on the margins of society. He concluded the procession around the edge of the city, traditional on this feast day, with a blessing at the Casa Serena, a shelter for the homeless run by the Missionaries of Charity.

“It is sad to see how easily today we are rude to each other, scorn and insult each other. Pressed by too much stress, we don’t contain ourselves and we vent our anger on everything and everyone. Unfortunately, often whoever shouts more and more loudly, and whoever is more angry, seems to be right and gains the agreement [of others]. Let’s us not allow ourselves to be taken by arrogance.”

The Pope, whose name was Jorge Mario Bergoglio, was elected in 2013. The Argentine is the first pope from outside Europe in over a thousand years. Since gaining the highest office in the church, he has repeatedly emphasised care for the poor and humility for those with power.