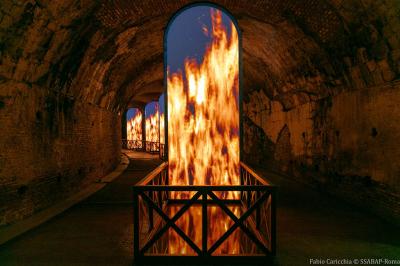 ROME – As part of a project to open to the public the maze of passages and chambers buried beneath the Roman baths, renowned artist Fabrizio Plessi’s exhibition offers one striking interpretation of the space. It is hard not to wonder, though, what has been lost in his artistic, de-historicised vision of the ancient building.

For nearly two thousand years, humans have wondered at the colossal scale of the baths built by one of imperial Rome’s most notorious dramatis personae. Something about his rhythmic name, which seems to echo itself – say it aloud, Ca-ra-ca-lla – still evokes that culturally embedded and familiar sensation of hatred and disdain of a pagan overlord. Few individuals better presage the spirit of later antiquity in collective imagination: in his deadly madness and still so tangible narcissism, Caracalla portends moral decline and decadence. The lengthening shadows of a world power gone to rot.

Perhaps that is one reason why the baths now feel eerily still, save the call of the powerful, ugly birds which inhabit the ruins. The hulking spectres of the once-magnificent buildings seem almost to have an ozymandian lesson to teach – of mistakes and wrongs fixed in lapidarian commemoration, the vestiges of a megalomaniac’s crumbled and decaying vision.

The baths were not, of course, merely a surface phenomenon. Below ground, armies of slaves equipped with wagons and horses worked hard to heat the waters of the numerous upstairs pools. We can only wonder whether the raucous citizen clientele can have appreciated the human cost in their collective otium, their leisure. Now, for the first time in nearly 20 centuries, some of this underground world has been opened to the public.

This is a realm of vast vaulted halls and dark passageways, long silent but punctuated by shafts of bright summer light from air vents in the ceilings, intended to keep their original wooden consignments from rot before they could be burnt in enormous furnaces.

In what has become something of a tradition, a fresh glimpse into the distant world of antiquity demands a modern update. We need, or are thought to need, re-introduction through a familiar medium: ancient realities daubed over with contemporary art. The most recent installation at the baths, in this newly opened underground world, is Fabrizio Plessi’s Plessi to Caracalla: The Secret of Time.

Plessi, born in 1940 Emiglia-Romana, is in every surface detail an (Italian) artist. Bountifully-groomed, sharply dressed and a prolix old-hand in the language of design, he recalls, gazing into the distance, his relationship with Rome. Nowadays he works mostly in Venice, where he graduated from the renowned Accademia di belle arti, but he maintains a healthy relationship with the Eternal City. Having built a successful career and a deserved reputation for powerful video-installations evoking elemental forces, especially fire and water, Plessi has returned to the city and one of its most beguiling spots.

A line of oversized monoliths looming out of the darkness, Plessi’s twelve, synchronised video-installations portray everything from signature depictions of elements to a sculpture of Caracalla’s head. They slowly rotate through the images, breathing a steady rhythm of new life in the dark. Accompanied by music from Michael Nyman, the overall effect is striking.

If it is hard to pin down what exactly Plessi adds to the subterranean world, it may be to his credit. Because it is generic (his curator, Alberto Fiz, would probably say “universal”), his art captures something which is hard to define. Solid and material, his work seems to reflect the realities of the place and the textures of the history: it claims, against the trends of modern technological advance, that the best way to understand these places is not through video reconstruction or virtual reality. It is through the human experiences of, for example, light and dark, stone and water, sound and space.

It is undeniable that Plessi has a specific view of the project. At the press opening to the exhibition, he spoke about his relation to the baths. While he loves the Colosseum, he associates the archaic arena with blood, violence and death. The baths, on the other hand, are for him a place of civilian activity and day-to-day life in Rome.

If you walk around Caracalla’s baths, though, it is hard to divorce their rather baroque opulence from the political context in which they were built. It is tempting, if not imperative, to gaze back from outside of Plessi’s particular lens. Don’t we miss something if we see the baths merely as a place of happiness for ordinary Romans?

Caracalla was born in Gaul in 188 A.D., the eldest son of the then-emperor Septimius Severus, a bellicose general from Libya who had seized power after a brief civil war. After growing up in the imperial household, Caracalla became the second ruler in the Severan dynasty at a time when Rome was still recovering from the upheaval of the late second century.

Ancient sources paint him, uniformly, as a dangerous tyrant, foreshadowing Rome’s so-called crisis of the third century and the persecution of early Christians. One writer recorded his father’s last words to Caracalla and his younger brother Geta: ‘‘Do not disagree between yourselves, give money to the soldiers, and despise everyone else’.” Caracalla followed the latter two piece of advice and became popular with the Roman military machine, though few others, in true Severan fashion. He had 22-year-old Geta murdered by the imperial bodyguard a year after he became joint-emperor and he died in the arms of Julia Domna, their mother, also in true Severan fashion.

That did not deter Julia from being instrumental in running the empire from Rome, as she had done for her husband. She was the first in a line of strong female members of the imperial family taking important political roles. When Caracalla was killed a mere six years into his sole-rule, murdered by a disgruntled soldier on campaign, it was another woman, Julia Maesa, who put her grandson on the throne to overthrow the interloper Marcinus and restore the Severans to power.

Caracalla was more interested in campaigning than he was in urbane life in the capital. He may never have seen his bath complex finished, with its impressive hypocaust system and aqueduct to supply water from the surrounding countryside. The baths certainly saw him, though, as the absent emperor’s presence pervaded the space with an extensive (and enormously expensive) decorative scheme.

Now the baths were for Romans a place of relaxation and pleasure, of course. There is evidence too for activities that we might not expect from the complex, which included formal gardens (think Delhi’s Red Fort), libraries (Latin and Greek) and palaestras (like a modern gym): of dining here and drinking there, of business and sex, and thefts and friendships and the whole plethora of human activity.

But they were also an integrated part of Roman power and hierarchy. They were funded by an imperial family and an aristocracy which granted, little by little and amid much moralising and despair, some of the luxuries of empire to their subjects, fellow Roman citizens. In attending the baths, Romans were playing their part in this scheme: a visit was a celebration of the political order, an implicit recognition of the right of rich to grant to poor, and a signal that you, too, could partake of activities traditionally aristocratic. Everyone could share in Rome’s bullish glory and bolshie status as the world’s first superpower.

Plessi’s art is deliberately natural (and, perhaps, neutral). He is interested in the elements and the constants of the human experience. But you need not adhere to Foucauldian obsessions to appreciate that something quite fundamental has changed when Plessi’s art is the way Rome is introduced to a modern audience. And in the depths of the slaves’ caverns at that, once witness to uncountable lives of servitude to an inescapable system, now witness to the lazy wanderings of tourists and the introspections of modern art enthusiasts.

Romans understood the inevitable political implications of images. We should beware, in opening up these places anew, of stripping them of their original context and content. Go and see Plessi’s art and the baths of Caracalla, but do not forget the realities of those who built them and those who worked there.

Plessi to Caracalla: The Secret of Time runs June 18 to Sept 29 at the Terme di Caracalla (viale delle Terme di Caracalla, 52, Roma). It is curated by Alberto Fiz and organised by the Soprintendenza Speciale di Roma in collaboration with Electa.

Tickets cost 11 euros, or 5 euros for a reduced price. More information can be found at: www.coopculture.it 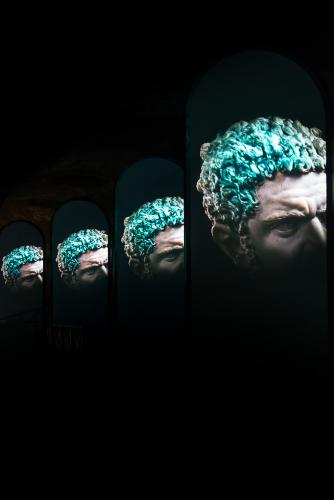 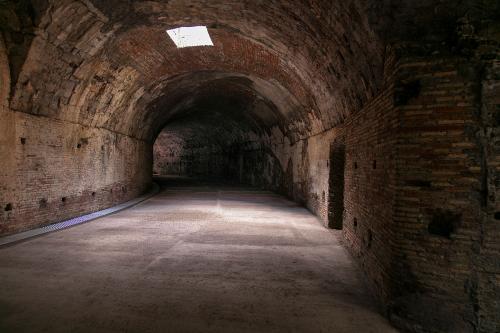