Italy qualify for round of 16 after thrashing Jamaica 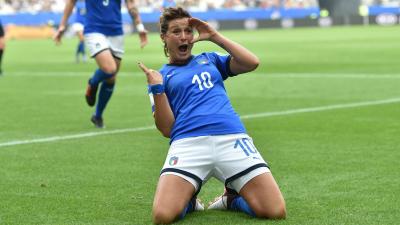 ROME - Italy's women's national football team proved far too strong for Jamaica in their World Cup clash, Le Azzurre progressing to the round of 16 from the group stages with a game to spare thanks to an impressive Cristiana Girelli hat trick and a late brace from Aurora Galli.

Italy had gone into the match top of their group after a breath-taking last-gasp victory over Australia in their opening fixture, and took no time at all picking up where they had left off. Just 11 minutes in, Barbara Bonansea’s wonderful weaving run was only cut short when she was chopped down by a clumsy tackle inside the area. The referee was left little option but to award Italy a penalty and while Girelli’s first effort was saved, she made sure her second attempt put her side ahead when Italy were controversially awarded a re-take for a foul by the Jamaica goalkeeper.

Italy were 2-0 just over 10 minutes later as a corner found its way through to Girelli, who was unmarked on the penalty spot to deflect the ball home with her knee and cap off Italy’s dominant opening display. Girelli then sealed her hattrick just a minute after the interval as she headed powerfully home from an in-swinging Giugliano cross.

Italy were not done yet though, and second-half substitute Aurora Galli produced the game’s best moment as her thunderous strike from 25 yards out flew into the top left corner shortly after she was brought on. Galli then capped off an impressive cameo as she latched onto a pinpoint through ball by Giugliano and rounded Jamaica’s shot stopper to slot home from close range and seal the three points with nine minutes left on the clock.

Italy have now progressed to the knockout stages of the World Cup, a feat few believed they could achieve given their tough group and lowly world ranking. Le Azzurre will face Brazil, who have won one and lost one so far, in their final group game hoping for at least a draw from the fixture to ensure they qualify in top spot and get a favourable draw for the round of 16.