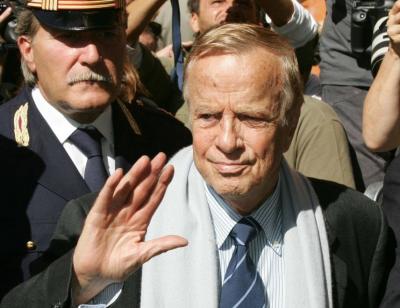 ROME - A pioneer and trend-setter in Italian 20th century film and opera, Franco Zeffirelli died last week aged 96 at his home on the Appian way. His work, which has already influenced a generation of younger directors and artists, will be influential for years to come. In the half century that he was active, Mr Zeffirelli came to epitomise a certain type of Italian cinema, with his distinctive eye for love stories and intuitive sense about what, and who, was romantic.

Born in Florence on February 12 1932, the illegitimate son of a fashion designer and a wool dealer, Zeffirelli had an origin story which lived up to his artistic credentials. He was supposed to be named “Zeffiretti,” meaning little breezes, a reference to Mozart’s Idomeneo. A misspelling on his birth certificate changed the name to Zeffirelli instead.

He would later draw on his early experiences growing up among English expatriates in 1930s Florence, notably in his later work Tea with Mussolini (1999), a film which reflected subtly and candidly on a childhood from many decades previously. In it, we see a young Zeffirelli discover the liberal and artistic world of a group of expatriate women, set against the backdrop of nascent fascism and eventually war.

Zeffirelli had had to halt his studies in art and architecture at the University of Florence at the outbreak of World War II.  During those years, Zeffirelli fought as a partisan and acted as an interpreter for British soldiers.

When the war was finished, Zeffirelli completed his studies but was inspired to move into theatre after seeing Laurence Olivier’s 1944 film of Henry V. His first job, as an assistant director to Luchino Visconti in his 1948 La Terra Firma, would have a formative impact on Zeffirelli’s style and subsequent work.

After nearly a decade of working for other directors, as well as in set design and directing theatre performances, Zeffirelli made his first film in 1967 aged 35. The Taming of the Shrew was critically acclaimed and launched Zeffirelli to fame, as he cast Richard Burton and Elizabeth Taylor in the lead roles in a production which captured the mood of the 60s. A reputation for imaginative casting was something Zeffirelli would earn again and again in the years to come.

His follow-up, Romeo and Juliet (1968), was well received too, cementing the young director as a household name, but it was not without controversy. Zeffirelli decided to cast two unknown teenagers, Leonard Whiting and Olivia Hussey, in the lead roles. The film was popular with many young people at the time, but the nudity of then 15-year-old Hussey was unacceptable to some. It was even claimed she was not allowed into the premier of the film because of her own nudity on screen.

Zeffirelli had, though, an intuitive sense of romance which few could match, and the surprise casting of Whiting and Hussey, after working in his first film with Burton and Taylor, was both bold and incredibly successful. Going against the received wisdom of both then and now, Zeffirelli dared to cast actors as young as the characters were meant to be, and he was rewarded for it.

If he had, though, a second sense about love and romance on screen, he was decidedly discreet about his own personal life. Though he made no secret of his homosexuality, he never saw it as a fit subject for his own art, and was most at home working in the established categories and stories of heterosexual love. There is a sense in which Zeffirelli epitomised a genre, bring it nearer and nearer perfection, but never moved – or wanted to move –  beyond its limits.

Throughout his extensive career in film, Zeffirelli continued to direct operas, working with names such as Dame Joan Sutherland, Tito Gobbi and his friend and idol Maria Callas. He once said of himself, "I'm not the greatest director of opera in the world. I'm the only one." His operas were staged at, amongst others, the Metropolitan Opera in New York and La Scala in Milan.

Later in life, he became the first Italian to receive a knighthood from the UK, in 2004, and served two terms as a senator for Silvio Berlusconi’s Forza-Italia (1994-2001).

Zeffirelli is remembered for the boldness and bravery needed to pull off his projects, which always displayed his instinctive understanding of how to tell stories, from the stage to film to opera. He became, through his long and high-profile career, a symbol of 20th century Italy and a true colossus of the screen.