We must not appease Iran, insist experts at EGIC 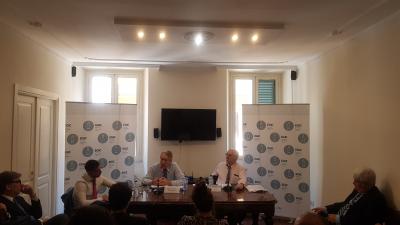 ROME – Unfolding events gave a keen edge to “Debating Iran,” the most recent high-level talks at the Euro-Gulf Information Centre (EGIC). This time under discussion was the decline of the so-called “Iran deal,” and its geopolitical implications.

It focussed minds, then, that on the same morning, Thursday, two oil tankers were attacked in the Gulf of Oman. The US Secretary of State Mike Pompeo has blamed Iran, as oil prices jumped by more than 3 per cent in an echo of an attack on four tankers last month, in the same region. Around a third of the world’s oil passes through this area between Iran and Oman, the Strait of Hormuz.

Although the Iranian nuclear programme began in the early 1970s with United States support, since the 1979 revolution and the relaunch of the programme in the 1980s under Ayatollah Khomeini, the USA has consistently opposed it, albeit with different policies. Last year, US President Donald Trump decided to withdraw from the deal negotiated by the Obama administration, the elegantly-named Joint Comprehensive Plan of Action (JCPOA), purely in terms of text the longest multinational treaty since World War II.

Trump’s actions called into question the entire approach of the international community. US sanctions against Iran followed. In response, the American flag was burnt in the Iranian parliament and Iranian forces in Syria fired rockets at Israeli targets.

So the event in Rome was, perhaps inevitably, pervaded by a sense of growing danger and genuine threat: “Now nobody wants war in the region, yet. But sometimes things happen due to miscalculations. The higher the tension, the more likely we are to descend into escalation,” explained EGIC analyst Antonino Occhiuto in his introduction.

If it was a shame that the views of the two respectful speakers were so closely aligned in this contentious topic, it was also a sign of the delicacy of the situation that neither wanted to overstep their (very considerable) area of expertise.

First to speak was veteran diplomat and politician Giulio Terzi di Sant'Agata, former Minister of Foreign Affairs (2011-13) and before that representative to the UN in New York and Italy’s ambassador to the US. Since then, Mr Terzi has been involved in the right-wing Brothers of Italy party as well as the somewhat anti-establishment, left-wing Radical Party. He argued that European countries should be more in-line with the USA, which they must realise is crucial to any resolution.

He pointed out that the media underreports the fact that Iran has drawn a red-line around interference in their missile programme. This constitutes, for him, a clear sign that they intend to use – or at least to have the option to use – the nuclear material they develop for military purposes (as opposed to energy). And, according to Terzi, the occasional European hints at willingness to circumvent American sanctions undermine the whole effort. The only thing which has brought Iran to the negotiating table in the past has been sanctions.

Terzi drew attention, moreover, to the less salient parts of the Iranian regime, which are for him clearly an integrated part of the reason why the international community should treat Iran with caution. It is a terrorist sponsor state, he said, where terror is regular tool in the diplomatic and political arsenal. He also bemoaned the imposed “symbol of submission and symbol of distrust of the resurgence of human rights”: the veil that women involved in negotiating in Iran must wear.

Terzi called it “almost criminal behaviour” to adhere to these cultural norms and encourage violent threats. We should be encouraging “the people who need our encouragement and support… millions of Iranians who are young people, women.”

“I agree with every word,” said the second speaker, referring to the idea of encouraging liberal Iranians. Gerald M. Steinberg is an Israeli academic at the Bar Ilan University in Tel Aviv, head of its Center for Conflict Management and Negotiations, with a background in physics and politics.

Mr Steinberg built on Terzi’s presentation of Iran as a state which serves a “messianic vision.” Branding Iran the “most destabilising actor in the world,” he pointed out that the danger posed was unique because of the possible domino-effect throughout the Middle East (in contrast, for example, the threat posed by the very isolated North Korea). He also argued that through its relentless rhetoric and policy objectives, Iran was a “genocidal” regime, which aimed to “wipe Israel off the map.”

As such, the world would be better off following a policy of isolating Iran. “Carrots and sticks, with the emphasis on sticks.” For Steinberg, dealing with Iran is not only not advisable but almost impossible: even when you negotiate, it’s only with intermediaries, and you never know where the decisions are coming from. We need, therefore, “more confrontation.”

These were interesting views for a European audience used to hearing praise for everything Obama-related. But with little prospect of an American policy shift in the near future, Europe must decide whether to follow the USA’s containment policy, or attempt further to integrate Iran into the international community, through trade and deals.

These are complex issues. What will be interesting, though, is how public opinion plays into these dynamics in European countries.

For the general public, talk of “containment” recalls the Cold War, of course. If that is opposed to “appeasement,” which could be seen as a consistent feature of Obama’s foreign policy legacy, then the clear failure of this policy in the 1930s may be enough to swing the consensus.

But the conflicts of the twentieth century are not the only conflicts branded into our collective memory. One of the striking things about the EGIC event was the use of language which recalled debates around the time of the Iraq war and its aftermath: from burqas as a symbol of illiberal submission (remember the debate around UK minister Jack Straw’s infamous 2006 column?) to “liberation” from… well, from Islam?  And of supposedly liberal young populations crying out for “our help.”

One of the reasons Iran is a difficult issue is that there are so many historical wrongs on both sides: from funding terrorism to wars to cultural imperialism to religious opposition. It is almost impossible to criticise the “other side” without incurring some share of the blame. Steinberg, for instance, talked about the possible end of the 1970 nuclear Non-Proliferation Treaty (NPT). He did not mention the fact that Israel is one of only four United Nations member states which has never signed the agreement. (The others are India, Pakistan and South Sudan.)

The point is the West faces questions both pragmatic (“what is the best policy to prevent proliferation?)” and normative (“what should we do, morally, with a regime we disagree with?”). A clear distinction between these will clarify many of the issues at hand, and help us to recognise when politicians present normative judgements in the language of pragmatic policy-formation.