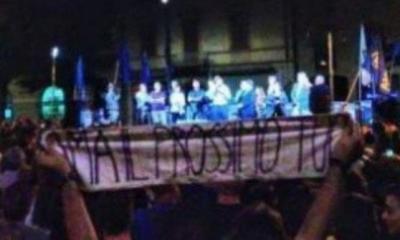 CREMONA - A peaceful protestor brandishing a “love they neighbour” banner at a League rally led by Matteo Salvini was physically assaulted by members of the crowd, requiring police to step and come to his aid.

The 25-year-old, who has not yet been named, can be seen on footage of the event holding up the banner and subsequently being targeted by Salvini supporters at the event. The victim was punched and kicked repeatedly until police intervened and Salvini told the crowd: “Leave him alone, poor thing.”

Salvini, though, then went on to mock the victim, adding: “A round of applause for the communist, because we would not have any fun without a communist... I feel pity for those who still walk around with a red flag with a hammer and sickle on it in 2019. In Milan there is a Science museum where they still study [such] dinosaurs.”

The victim received the full support and sympathy of the Cremona’s mayor after the event. “We must stop inciting fear, unleashing hate and divisions and constantly seeking an enemy… It is incredible that a message from the Bible can be seen as a provocation, to which the response should be violence,” declared Gianluca Galimberti. “It tells you a lot about the current climate,” he went on to add.

The banner was seen as a challenge to Salvini’s stringent anti-migrant policy which has been heavily criticised across Italy, in particular by Pope Francis who upholds that “love they neighbour” should extend to neighbours beyond Italy’s borders who turn to the nation for help when seeking to escape suffering, only to be turned away.

Salvini, who is under investigation for migrant kidnapping, has most recently been lambasted for his decision to close a migrant shelter in Bologna which housed 183 refugees, many of whom will now be sent to Sicily and could likely still be deported.

“Migrants are moved around like parcels… [this] is unacceptable and not worthy of a democratic nation,” Filippo Pieri, a local leader of the Italian Workers Union, told journalists. The move was heavily protested in Bologna.