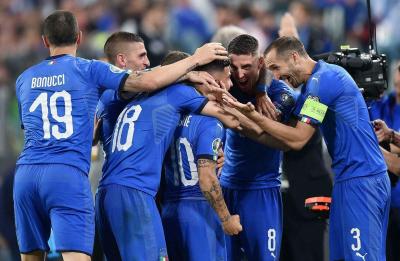 Italy celebrate their late victory over Bosnia and Herzegovina

Despite the vocal support a home crowd at Juventus’ Allianz Stadium, Italy had to do it the hard way after they fell behind to a clinical finish by AS Roma star-striker Edin Dzeko in the 32nd minute. In fact, despite over 60 per cent possession in the first half, Roberto Mancini’s men were unable to get a goal of their own and went into the break with it all to do.

Italy, though, came flying out the blocks after the break and Napoli forward Lorenzo Insigne’s stunning volley just four minutes into the second half brought the home side level.

Italy continued to push, and while for large periods of the game it just didn’t seem to be their day, they finally made their dominance show as emphatically Verratti sealed the victory with the clock quickly running down. Insigne this time turned provider, laying the ball to Verratti to curl a wonderfully composed finish into the net from inside the area.

Italy will now travel to Armenia on September 5 for their next qualifying game, knowing that another victory would leave them on the cusp of qualification for the Euro finals next year.