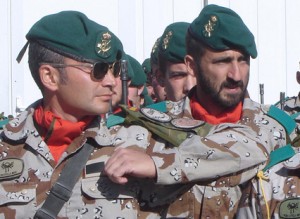 HERAT, Afghanistan—The city feels like it is on the edge of the world. The wind blows and whips dust in your face, curtainesque burqas flapping furiously in street-front shops within the city on flatlands running to the Iranian border. The inhabitants are inured but to me it was a shock, albeit initially a welcome one, after Kabul’s warren-like streets heavy with exhaust and dust and rotting smells, concrete blocks and the surrounding mountains which trap and protect, blast walls and sandbags hoarding ever more street space throughout the city.

Italian troops in Afghanistan are set to rise to 4,000 by the end of the year and an Italian general is head of the Regional Command West, with its 4 PRTs including the Herat City one on the Italian beat. They are technically responsible for security in the city, a task they are to begin handing over to local security forces next year.

Along the ‘’police office road’’ I was staying on, the backs of street signs are painted in the vertical red, green and white of Italian flags, while the blue rows of seats at the airport have a miniature version of the same flag alongside ‘’Gift from the Italian PRT to the city of Herat’’ on their backs. Huge quantities of ingredients for pizza, green bottles of Italian sparkling water and Peroni are shipped in to cater to the troops in the country: a Turkish colonel and long-time friend credited the Herat base as having instilled in him a love for Italian food and alcohol during his time in Afghanistan. Afghans are far from pleased with this fact, however: As one Afghan put it, ‘’foreign troops spend exorbitant amounts to ship in food, a fraction of which if bought from locals would do more for the country’s economy and unemployment rates than most of the NGOs put together here. And then they leave all the trash around for us to deal with afterwards: And we’re supposed to be grateful to them?’’.

With an estimated only 10 percent of the country’s population having access to electricity and less than half with access to what USAID calls ‘’improved drinking water sources’’, recycling facilities and environmentally friendly waste disposal is clearly not a priority and, hence, the tonnes of waste produced is having and will continue to have a significant effect on the country’s landscape and health.

Cooperazione Italiana is active in the city as well, and a Milanese doctor who had also previously worked in Nassiriya told me that she was aghast at what she had seen in the regional hospital after her first week in the country. ‘’At least in Iraq there was some sort of organisation which had been destroyed but which was remembered by those there. The staff were educated people wanting to learn. Here there is nothing, everything has to be done from scratch’’, she told me, voicing the desire to go back to Iraq though admitting she had enjoyed a level of protection allowing her virtually no contact with the populace outside of a professional context. I met her at a ‘mobile bar’, a weekly get-together of the ex-pat community which moves from one foreign worker’s place to another out of security concerns.

I was also shown around a few sites by a German working in the field of water supplies for GTZ, who has been there for years and who regaled me with stories of withdrawing piles of GTZ money during the Kabul Bank run to take it to his offices for safekeeping, surrounded by armed guards, as well as of the freezing cold of the 2007-2008 winter when pipes had frozen over for weeks. An image of the Maslakh refugee camp in that period has stayed with him, of women and children having nothing to eat and burning plastic bags for heat within tiny mud huts lacking ventilation.

He took me out to the camp the following day, on the wide asphalted road leading out to the Iranian border, about 50 miles away. On the outskirts of the city itself, an immense expanse of articulated lorries line the sides of the road, with a number of different names on their sides but a seeming predominance of German ones.

‘’Do you know how much these things cost? You’ve got to wonder where they get the money for these things,’’ he said, half swearing under his breath.

We also passed the road leading off to the part of the city known as Jebrail, in which the Hazara community (third largest ethnic grouping in the country, distinguishable by their Mongolian features and known as having been the most discriminated against under the Taliban regime) has staked out its claim and into which other Herati residents fear to stray.

And a bit farther out there is the Al Maslakh (‘’Slaughterhouse’’) camp itself, once known as the largest in the world but which returnee programmes have somewhat reduced. We drove around in his off-road vehicle for a bit but did not stop in this city outside of a city, mud huts surrounded by children and men digging, carrying bricks and pumping water, who paused to look warily, defiantly, at us as we passed by.

Back in the city and out alone to get a feel for the city, I went to the park in front of the Friday mosque but was almost immediately ‘’escorted’’ out by a number of young, angrily gesticulating turbaned men, and then chased by a group of roughly 9-year-old boys. The boys, getting excited, starting throwing things at me including a short, thick stick which hit my back rather hard as I was trying to calmly to walk quickly but firmly away, with reprimands from a filthy, stern-eyed elderly street sweeper - whose side I stayed at for protection until they dispersed – which eventually got them to stop.

Out of the shop and down a street lined with nuts and spices sellers, their wares hues of burnt siena and blood red, I stepped into the street on this late Thursday afternoon (the end of the workweek in this part of the world) and had my non-descript brown kurta-covered (long, loose shirt) derrière grabbed by two laughing teenage boys on one of the ubiquitous motorbikes racing through the streets.

And almost felt I was back in Italy for a second or two. 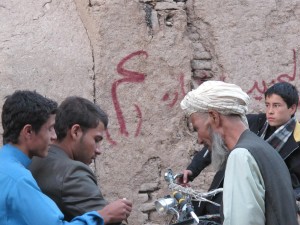 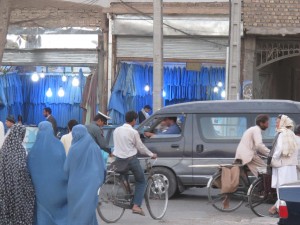