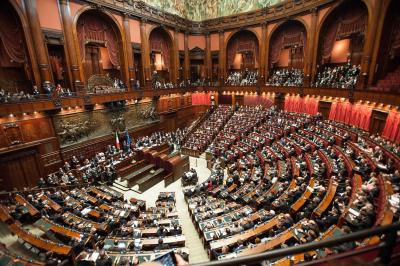 Italy's Chamber of Deputies voted to pass the mini-BOTs motion

ROME - The European Union has been warned that the proposed introduction of a parallel currency in Italy, so called ‘mini-BOTs’, might be a Trojan horse for the nation’s exit from the euro, a move that could subsequently trigger a eurozone existential crisis.

Writing for the Financial Times, columnist Wolfgang Münchau warned of the dangers that such a currency could pose if the Italian Chamber of Deputies were to follow through on the outcome of a non-binding vote on the mini-BOTs which saw the plan unanimously supported by all those present.

Münchau warns that the introduction of such mini-BOTs “could… precipitate an immediate financial crisis” in Italy and undermine the eurozone more widely as the union would likely “lose its cohesion if member states started to issue their own money – however fake it may be.”

The notion of mini-BOTs appeared only recently in Italian politics, first suggested as a means for businesses and individuals who are owed money by Italy’s public administration to be repaid. The mini-BOTs would take the form of real money, and their denominations could yet be the same as those currently in use for the euro notes. The government has also left the door open to the possibility of Italians eventually paying their taxes with mini-BOTs as well as euros.

The theory is that, if the government are keen to leave the Eurozone in the coming years, such mini-BOTs pave the way to an alternative currency and begin to take the weight off the nation’s reliance on the homogenous European currency. The introduction of a parallel currency would also increase the government’s funds and allow Salvini, most notably, to carry through his promised big income tax cuts.

Münchau, though, warns the Italian government that such a move is unwise as it will likely not go down well with the EU, especially given Italy’s current economic predicament. Furthermore, if the League-5 Star Movement coalition is not considering leaving the Eurozone, then the issuance of mini-BOTs will likely only weaken the nation’s fiscal position further, see a decline in euro tax revenues, and would almost certainly not prove a successful means of escaping their current debt as the EU.

The mini-BOTs are not, however, to be underestimated and Münchau was clear in his warning to the EU to “tread with caution.” Italy currently finds itself in the early stages of the excessive deficit procedure, a number of steps that eventually lead to financial penalties for nations acting economically irresponsibly, and is only more likely to resort to its parallel currency if put under too much pressure.

“There is a strong case not to proceed with an excessive deficit procedure right now and to wait until the autumn.” Münchau concludes. “The danger is that the more Mr Salvini is politically cornered, the more likely he is to resort to this instrument. When he does, the eurozone crisis will return. And the ECB [European Central Bank] may not be able to come to the rescue this time.”

Italy’s coalition government has since pushed back against criticism, which has even come from the nation’s own Economy Minister Giovanni Tria, and will look further into the option over the coming weeks.