Fognini moves into world top-10 for first time in career 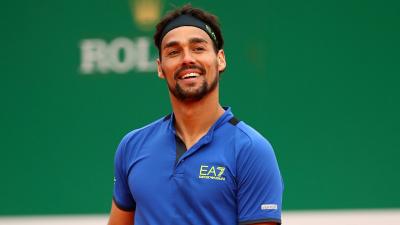 ROME - Fabio Fognini has become the first Italian men’s tennis player in almost forty years to rank in the world top-10 as he moved above John Isner and Juan Martin del Potro to reach his highest ever career ranking.

Fognini, who moved up the rankings two places in June and sits in tenth spot, also became the oldest ever player to rank in the top ten for the first time in their career.

“Reaching the top ten is a bit like making a dream come true. I look back at myself as a child on the court with a racket bigger than I was and thing: that child has come a long was,” Fognini said. “This is a great achievement and drives me to continue to give my all to the sport I love.”

The news follows a stellar season for the Italian which saw him claim victory at the Monte-Carlo Masters. The win marked the biggest title of his career and he did so by seeing off world number 3 Alexander Zverev and becoming only the fourth player in history to beat Rafael Nadal thrice on a clay court on his way to the final, in which he defeated Dušan Lajović.

Subsequent impressive performances at the French Open and the Madrid Masters have got Italian fans excited about what Fognini could achieve this summer as the tennis circuit turns its attention to Wimbledon, which starts on July 1.