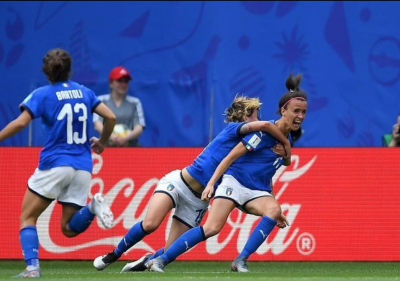 Bonansea is mauled by teammates following her last gasp winner

ROME - Italy got off to a flying start at the 2019 FIFA Women’s World Cup as they came from behind to dramatically snatch a 2-1 victory against Australia in the dying seconds thanks to Barbara Bonansea’s second goal of the match.

Le Azzurre went into the match off the back of two straight victories in recent friendly matches, and buoyed by their recent form flew out the blocks early on. Italy almost had the dream start in the ninth minute as Bonansea held off three Australian defenders to slot past veteran shot stopper Lydia Williams. Bonansea’s effort, however, was ruled out after VAR adjudged her to have been fractionally offside in the build-up to the goal much to Italy’s dismay.

Things then got worse for Le Azzurre as some sloppy defending saw Sara Gama give away a penalty just over ten minutes later. Star striker Samantha Kerr stepped up to take it and while her initial effort was brilliantly parried by Laura Giuliani, she was quick to react to poke home the rebound and put her team 1-0 up.

At half-time, few thought Italy, a team absent from the Women’s World Cup since 1999 and a full 9 places lower than Australia in the world rankings, had much hope of staging a comeback, but that is exactly what they did.

Bonansea led the Italian charge and was at the heart of the action again, robbing the ball high-up the pitch ten minutes after half-time and coolly slotting home to draw the sides level. When Italy then had a second goal disallowed, again for offside, it seemed as though it just was not to be.

But Bonansea had other ideas and a thumping header at the back post five minutes into injury time saw Italy claim a famous victory and draw level with Brazil at the top of Group C. Italy will now face Jamaica, before their likely crucial qualification showdown with Brazil later this month.