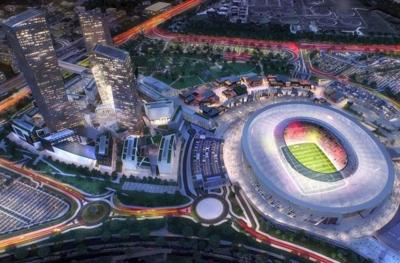 ROME - AS Roma’s aspirations of moving into a new stadium have hit yet another road block as discussions with local government officials about transportation links to its proposed Tor di Valle location have reached an impasse.

The Giallorossi have been planning the move since 2014 when the club first released its proposals for the Stadio della Roma, a new home which is set to house up to 60,000 fans and have a section specifically designed to house the club’s Ultras.

Proposals were eventually approved by local authorities in February 2017 after months of protracted negotiations, but the club encountered problems at the start of the planning process and consequently extended their lease at the Stadio Olimpico, a stadium they currently share with arch-rivals Lazio, until 2020.

However, following recent discussions with Rome’s mayor Virginia Raggi it appears as though the club may be forced to extend this lease yet further as the State was unable to guarantee the swift completion of new transport links that would connect the stadium to the centre of the city. Raggi made it clear that the stadium could not open until such links were in place, as current transport links to Tor di Valle would not be able to cope with match-day requirements, however offered no assurances that such links would be completed before the proposed 2020 deadline.

Raggi’s position has angered many at the club as it was under her insistence, in 2016, that the State took responsibility for the construction of transport links to the stadium. Prior agreements with her predecessor Ignazio Marino had provisionally agreed to allow the necessary public transportation to be built privately. Such an agreement would likely have seen the works completed by 2020.

As it stands, with no assurances in place, AS Roma’s board face a dilemma as further delays to the opening of the stadium risk financially crippling the club. Construction costs for the Stadio della Roma stand at an estimated 300 million euros, however the total cost for facilities and additional venues such as bars, restaurants, shopping areas, and club training facilities are likely to see the project get closer to the 1-billion-euro mark. Experts have predicted that if delays to the construction transport links run on much further and the club is not able to move in by the 2022-23 season, Roma will likely have to scrap the project entirely. The club are thought to be considering pursuing legal action to receive assurances over their proposed project and investment.

Roma will hope the situation is resolved promptly to appease fans who have rallied against the club and its ownership in recent months following a disappointing season and the club’s decision to not renew Roma legend Daniele De Rossi’s contract and in doing so treat him without the decency that fan’s believed a man who had given so much to the club deserved.