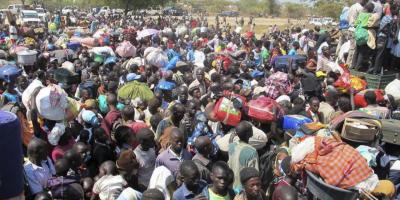 Here is the Insider’s guide to six areas of the world which sometimes pass under the mainstream news radar. This was written in response to an appeal by the UN’s World Food Programme to cover less of Trump and Brexit, and more of the increasing number of humanitarian disasters worldwide. You can read more about that here.

Yemen: most people know that there is a famine in Yemen, but they don’t understand why. There has been a civil war in the poor Gulf nation since 2015, when Houthi rebels, an Islamist group which has been around since the 1990s, ousted a leader who had replaced the country’s long-standing authoritarian ruler after the 2011 Arab Spring. A Saudi-led coalition, supported by the US, UK and France, is trying to return the beleaguered president to power.  Military stalemate is entrenched and brutal bombing commonplace.

In February, the UN dubbed the situation in the poverty-ridden Gulf nation “the worst humanitarian crisis in the world,” with famine, cholera and human rights abuses on all sides. They reported some 24 million people – close to 80 per cent of the population – need assistance and protection. Around 20 million people are food insecure, half of them suffering extreme levels of hunger.

South Sudan: only two years after earning independence, a civil war broke out in the young nation between the government and opposition forces in 2013, when the president accused his deputy of attempting a coup d’état. Fierce fighting followed, despite numerous attempts to come to a peace agreement. A ceasefire was signed in September 2018, but the situation on the ground remains dire.

In addition fighting, a failing economy and severely reduced crop production led to hunger and malnutrition at historic highs. Famine was declared in some regions in 2017, linked to fighting around country’s southern agricultural heartland. The WFP reports that some seven million people, which is 60 per cent of the population, will be food insecure this summer. In January 6.17 million people did not know where their next meal would come from. According to Amnesty, around a third of the population has been displaced since 2013.

Iraq: Iraq has somewhat fallen off the new-map since the West stopped being directly involved. The country has lacked stability ever since the invasion by the US and allies in 2003. In 2011 fighting from Syria spilled into the country and a group calling itself ISIL filled the power vacuum from 2014 onwards. ISIL has been largely defeated, but some three million people were displaced in the meantime and, despite many returning home, around 700,000 still live in camps.

Limited resources and years of conflict mean some 800,000 people needed food assistance every month at the end of 2018. Around 10 million need humanitarian assistance in general, according to the WFP, which has been working in the region since 1968.

Democratic Republic of Congo (DRC): Africa’s second largest country has faced political instability and intermittent conflict between government forces and ethnic militias for many years. Despite being rich in resources, most of the population lives in extreme poverty. Most recently, conflict erupted in the Kasai region in 2016. The delay of elections amid accusations of fraud has added to the instability.

As the WFP said, “The Congolese people suffer the effects of protracted conflict and instability, chronic poverty, underdevelopment, human rights violations and insecurity.” Displacement of smallholder farmers means that around 7.7 million people are severely food insecure (up 30 per cent from last year). Yet the DRC is not a high-profile emergency: despite representing 10 per cent of the people in need of humanitarian aid worldwide, DRC receives only 3 per cent of global funding. THE WFP has worked there since 1973.

North East Nigeria: the jihadist organisation Boko Haram was founded in 2002 but has been especially active since 2009/2010, presenting itself as Africa’s Islamic State and allying itself with its ISIL brethren in the Middle East. It reached a peak in 2014/2015 when it was the world’s most deadly terrorist organisation and became notorious for kidnapping 276 school girls, of whom 121 are still missing some four years later, with 13 presumed dead. The group has been effectively combatted but attacks continue. It operates mostly in north eastern Nigeria, but also in Chad, Niger and Cameroon.

Even without the conflict, 60 per cent of Africa’s most populous country live below the poverty line. In addition to its terrorist attacks, the New York Times reported that Boko Haram has displaced around 2.3 million people since 2010. As a result, some 7.7 million people in Nigeria currently need humanitarian assistance, according to the WFP.

Syria: this is the most notorious civil war of modern times and well known for the subsequent refugee crises. What began as an attempt to oust President Bashar al-Assad in 2011 has grown into a multi-sided and devastating conflict. Assad’s forces occupy around 60% of the country, but significant areas are held by the various rebel groups, including: the Syrian Interim government (loose alliance of opposition groups); ISIL (now significantly reduced); Tahrir al-Sham (an alternative government in the Idlib Governate, in north west Syria); and Rojava (an autonomous area of self-governing regions in the north east).

Because the conflict has been going on for some eight years and authority is very splintered across the country, almost all sides are accused of serious human rights abuses. In addition, 5.6 million Syrians have fled their country since 2011 (mostly to Lebanon, Jordan, Egypt, Turkey and Iraq) and 6.6 million are internally displaced.Some 13.1 million are in need of humanitarian assistance. Of these, 6.5 million people are acutely food insecure, while an additional four million are at risk of slipping into food insecurity if not assisted adequately, according to the WFP. 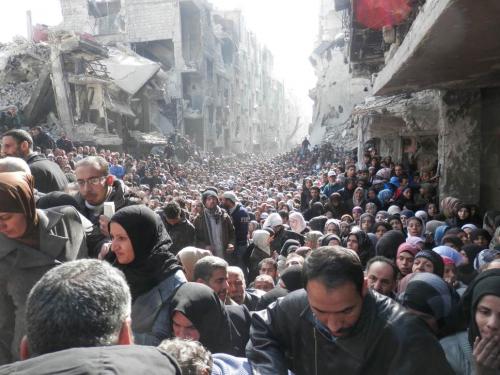