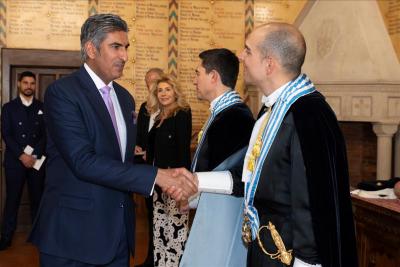 he Charge D'affaires of Kuwait Chargé d'Affaires to the Republic of San Marino Sami Al-Zamanan conveyed congratulations of His Highness the Amir and His Highness the Crown Prince Sheikh Nawaf Al-Ahmad Al-Jaber Al-Sabah to San Marino's new heads of state.

ROME — A Kuwaiti diplomat and chargé d’affaires has asked for a ’50 percent’ cut of money owed to the Italian Insider by the Kuwaiti Embassy, which has refused to pay for years for work the Embassy commissioned from the newspaper’s journalists for a special report on Kuwaiti-Italian relations.

Kuwaiti chargé d’affaires Sami Al-Zamanan mentioned the possibility of his receiving a percentage during informal talks last summer an the Italian Insider delegation after a formal meeting held at the Italian Foreign Ministry which has sought to mediate in the dispute over Kuwait’s refusal to pay 10,000 euros and legal costs and interest owing for the work by Insider journalists for the Embassy.

“Ten thousand euros is nothing for Kuwait,” Sami Al-Zamanan told the Insider chief editor and the Insider’s Italian lawyer as they left the Italian Foreign ministry building.

“But you will have to give me 50 percent,” Mr Al-Zamanan added with a smile.

The remark may well have been a joke but if so it was in poor taste since the Embassy still has not paid the Insider the outstanding amount despite the chargé’s assurance that such a sum of money was “nothing” to the oil-rich emirate.

Mr Al Zamanan currently is acting ambassador at the Embassy. In December the Embassy lawyer proposed to the Insider effective “compensation” for what he called a “misunderstanding” over the failure to pay but the lawyer’s proposal has not come to pass.

Against this background the board of directors of Insider Press Srl, the owners of the Italian Insider, are considering whether to ask the Italian Foreign Ministry to resume its good offices.