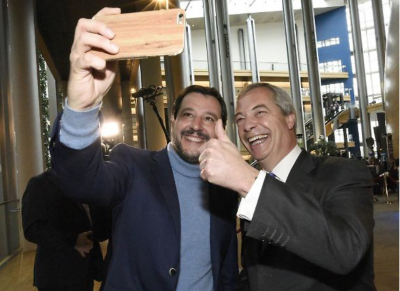 BRUSSELS - A European coalition between Italy’s League and England’s Brexit Party is very much on the cards after delegates from Salvini’s party said that discussions with their British counterparts had gone well.

Marco Zanni, a League MEP, told press on Wednesday that his party was close to reaching an agreement with the Eurosceptic party led by the man commonly seen as having championed Brexit.

“We will see if we can wrap things up with [Farage] next week,” Zanni said, before adding that discussions had gone “very well.”

The alliance would unite the two populist parties whose right-wing, anti-immigration stances have garnered significant amounts of support in recent months. The League and the Brexit Party both polled a comfortable first in the recent European elections, receiving 34.3 per cent and 32 per cent of votes respectively.

The results meant that both parties won 29 seats in the European parliament, placing them amongst the most successful political bodies across Europe.

Farage had previously allied himself with the anti-establishment 5 Star Movement party led by Luigi Di Maio, however the latter’s abysmal performance in the European elections, in which they lost close to six million votes when compared to the 2018 general election in Italy, means that a continuation of this partnership is likely off the cards.