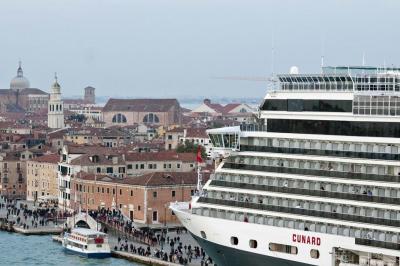 VENICE – Recent research from companies like Responsible Travel highlights the inexorable and mounting crisis that the tourist industry is creating. Nowhere is this more obvious than in the Lagoon City, which has been constantly scrutinised as its prepares for a new tourist tax, now being slowly implemented. The only valid question is why those in power aren’t doing more.

Overtourism is the word invented by the UN’s World Tourism Organisation for the familiar story. If “geography-speak” seldom lives up to the reality it attempts to convey, this makes it all the more pressing to register the real situation: neighbourhoods emptied of those who once lived there and communities deformed beyond recognition by the arresting demands of international money.

Only since 2017 has the “process” (as it is often termed) been considered capital and “overtourism” become something of a buzz-word, but this somewhat belies the longue durée and the ever-present power of the tourist’s purse. Notoriously, in the first century BC and onwards a small town on the Bay of Naples, swollen with holiday-makers from ancient Rome, became synonymous with indecent luxury and wanton degradation in the familiar logic of Roman morality. Baiae was appalling and enthralling in equal measure, a “den of licentiousness and vice” (in the words of elegist Propertius), though it was surely none of these things to its original inhabitants.

Unfiltered as they are through the sermonizing lens of the ancients, modern examples can almost seem bland. But Barcelona and Dubrovnik are just as sad as Baiae’s ancient testimony to the moral, economic and social strains that visitors in a holiday mood can impose. And yet these pale in comparison to Venice, subjected to the unavoidable logic of overtourism on a megalithic scale.

It is a logic that runs like this: so many people visit a place that it becomes distorted and warped until no one can quite remember why they wanted to go in the first place. Economic benefits are substantial and alluring, but they leave a society dependent on visitors and changed beyond recognition. Local responses are dictated, at least in part, by the voices of those who stand to gain most from tourism.

The numbers alone tell the story of ironically-named La Serenissima. The city receives around 24 million tourists each year, which can mean some 60,000 tourists on a single busy day. Compare this with the shrunken permanent population of around 55,000 and you have some idea of the place Venice has become. Not only does the UNESCO World Heritage site feel ruined (in the popular areas, at least), but it is also at risk of being literally destroyed.

The “Floating City” may not be so much longer. For decades, we have been warned that Venice is sinking, and this is not helped by the cruise ships which dump their human cargo into the city for the day and disturb the waters. There have been resolutionsin the past to ban cruise ships from certain areas, but without effect. On some days, up to 44,000 day-trippers enter Venice, including those arriving from the mainland. Crucially, these visitors don’t pay the hotel tax that others would pay and often don’t eat in the city.

Venice’s answer is a new tourist charge with rates varying depending on the time of year and age of traveller, between three and ten euros per person. Reactions have been varied. League Minister for Agriculture and Tourism Gian Marco Centinaio called it a “useless and damaging measure.” Even the mayor of Venice Luigi Brugnaro was cautious in presenting the new scheme.

At the Foreign Press Association in March, Brugnaro emphasised that this was not meant to prevent people visiting Venice, but to facilitate the upkeep of the city. Venice’s canals mean, for example, that rubbish collection can cost up to 40% more than in other cities. “We don’t want a city for the rich, but rather a city rich in respect,” he said.

This is an admirable sentiment, but suggests he feels the need to head off accusations that Venice will become a city for well-off. The truth is, though, that the relentless march of globalised travel and a world economy tread their own path: Venice has become a city for the wealthy already, as anyone who tries to book a hotel or buy a meal can hardly fail to notice.

The point is, surely, that a tourist tax of this amount will not change the sort of people visiting Venice, nor the numbers to any significant degree. The vast majority of those who currently visit Venice can easily afford the tax. Students and children under 6 are exempted. The tax is a start, yes, but what about measures which would actually reduce the numbers of visitors?

You don’t have to resort to extreme measures like those in, for example, the fragile habitats of Botswana where numbers are kept to a minimum by charging thousands of dollars per night for a visit. CEO of Responsible Travel Justin Francis explained to the Italian Insider: “The issue of fairness and 'rights' is an important one. While we want to make tourism accessible for as many as possible, despite income levels, residents have rights too. The right to travel does not override the rights of residents or the need to protect cultural and natural heritage.  I like the idea of advance ticketing for attractions - this favours those keener people who plan ahead, not necessarily the wealthier tourists.”

Centinaio asked his Twitter audience, “Do we want to become a country that repels tourists?” Who could blame Venice for answering, with its own rather unique set of challenges, in the affirmative?

If you agree, the next question is how exactly to respond to the powerful combined push of wealthy tourists after leisure and pull of local communities after profit. Francis was keen to draw attention to the role of “democracy and planning” in deciding what was acceptable or not. This is commendable, but risks being overly vague. Our consumerist society demands growth and increased profit above all else. It is the job of the government to protect communities from that inevitability. We cannot rely only on asking tourists to be “considerate” or on communities merely to “plan.”

It is the job of Venice’s city authorities to protect their city with concrete measures to reduce the number of tourists. This involves going above and beyond the tourist tax in its current form. Over to you, Brugnaro.

*Figures are taken from the 2018 report commissioned by the European Parliament's Committee on Transport and Tourism.

You can find more information at: https://www.responsibletravel.com/copy/what-is-overtourism