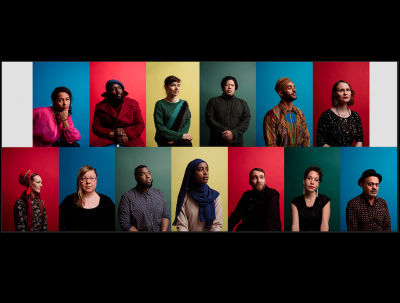 VENICE – This year’s Biennale sees yet another exciting new addition: the inaugural exhibition of a diverse and innovative group of artists, the Miracle Workers Collective (MWC), in the national Pavilion of Finland.

MWC is a transdisciplinary and “anational” community of artists, filmmakers, writers, intellectuals, performers, and activists. Their exhibition sets out to explore the miracle as a poetic vehicle from which to expand perceptions and experiences. As such, the artists present MWC’s collective film, The Killing of Čáhcerávga (2019), set in dialogue with the site-specific sculptural installation Ovdavázzit – Forewalkers (2019) by Outi Pieski.

The former is a collision of five shorter films that together tell a disjointed, communal narrative. Using a call-and-response strategy, the film expresses a politicised dialogue focussed on indigeneity, movement and migration in contemporary Europe. This reflects the collective’s shared interest in exploring the potentiality of disobedience. Travelling through dreamscapes, lonely snowy plains, absurdist capitalist underwater scenes, greenhouse gardens and desert landscapes, the film challenges us with impossible spatial rules, strange dialogues and unresolved endings.

The exhibition also expands beyond the confines of the pavilion. Like the film, Outi Pieski’s Ovdavázzit – Forewalkers prompts questions around movement and borders. Paying homage to the artist’s Sámi ancestors, the installation creates a dialogue between thi Fino-Ugric people’s traditional handicraft, duodji, and contemporary art. Sharing both collective and personal histories, the installation gives a voice to the complex discourse around the Sámi people’s struggle to break out of colonial and nationalist enclosures.

Pieski’s work furthermore transports elements of the arctic tundra to the pavilion, including a series of “dancing” birch trees and lichen, an important food source for reindeers. Arctic peoples have thrived in a harsh environment for millennia, thanks to their extensive knowledge of the land and waters. This ancestral, ecological knowledge is increasingly recognized as a crucial source for understanding Arctic biodiversity and for developing effective strategies for its conservation. This includes learning from the Sámi philosophy of ‘agreeable life’, soabalaš eallin, which proscribes a way of living in harmony with the earth.The sculptural installation pays homage to the transnationality of the Sámi people across Norway, Sweden, Finland, and Russia. Creating a space of encounters upon which to pause and reflect, the pavilion challenges the notions of national representation and belonging.

For the first time ever at the Biennale, and probably in Italy too in such a wide range, Sámi art and culture are on display. As such the President of the Finnish Sámediggi, the Sami Parliament,Tiina Sanila-Aikio joined the opening ceremony of the Aalto Pavilion at the Biennale.

Another notable piece isMovable Membrane (2019), a modular set by Lorenzo Sandoval, which invites the audience to stop and reflect. It is inspired by an iconic element developed by architects Aino Marsio-Aalto (1894–1949) and Alvar Aalto (1898–1976): the curved surface. The form works as a both deconstruction of, and a re-engagement with, their work, and it attempts to rethink the role of architecture in the construction of the welfare state. At times presented metaphorically as a miracle itself, the set works as a membrane for osmosis and encounters.

In addition to the exhibition at the Finnish Alvar Aalto Pavilion, MWC explores the artistic parameters of the Biennale by taking its work out of Venice. Their performative, discursive, filmic and sonic arm appears in public events in Berlin (Germany), Venice (Italy) Kárášjohka (Sápmi / Norway), and Helsinki (Finland) in 2019. Widening the “collectivity,” these events present diverse practices where notions of transmutation, divination, and healing become processes of “rematriation” (respect for Mother Earth), restoration, and joy.

A Greater Miracle of Perception: The Venice Iteration was the second in a series of public events which took place at the Finnish Pavilion. The event included the members of the collective as well as invited guests, such as indigenous rights activist Petra Laiti and dance artist Esete Sutinen.

Furthermore, the publication A Greater Miracle of Perception explores how miracle making – making the impossible possible – is reflected in artistic practices today. Departing from the traditional exhibition catalogue, the publication includes commissioned essays and poetry by writers close to the collective as well as by members of the collective itself. A Greater Miracle of Perception is published by Archive Books and Frame Contemporary Art Finland.

The exhibition, which is commissioned by Frame Contemporary Art Finland, runs May 11 to Nov 24 at the Alvar Aalto Pavilion of Finland, Giardini. 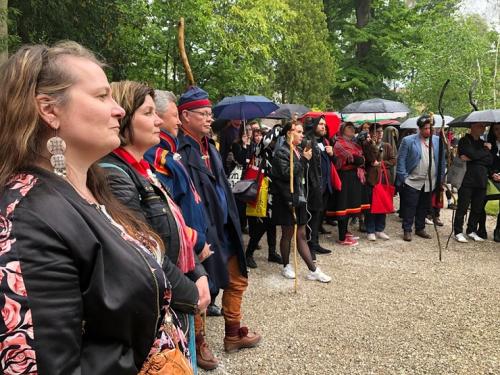 Opening Ceremony at the Finland Pavilion 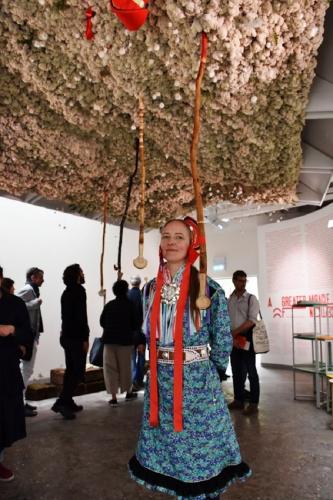